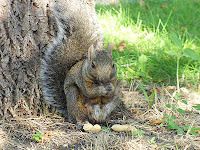 Take a moment to read up on the U.S. House of Representative's H.R. 3261, the Stop Online Piracy Act ("SOPA"), along with the U.S. Senate's Preventing Real Online Threats of Economic Creativity (when did "Economic Creativity" become a "threat"?) and Theft of Intellectual Property Act (PROTECT IP or "PIPA") Act (S. 968).

The article mentions movies and music but among the contraband are video games, e-books, television shows, programming and anything else that can be copyrighted--even "knockoff" cloths and accessories. Congress soon backed off from DNS filtering (i.e. forcing Internet Service Providers to black out offending domains in their entirety) due to freedom of speech concerns detailed in this article on the University of Pittsburgh's "Jurist" site.

The objection to DNS filtering was collateral damage. Copyrighted material on one, tiny subsection of a website could shut down everything on that domain name, including unrelated web sites. Disagree with something you see on a web forum? Upload some copyrighted files or text to that venue and have everything on that entire domain disappear!

Yesterday, SOPA and PIPI were "postponed" in the face of massive protests from internet users and providers. On the same day, the owners of Megaupload, a popular download site, were arrested for copyright infringement in New Zealand. This suggests to SOPA opponents that current law, if enforced, is adequate to protect copyrighted material.

How much money is involved? Forget all the other forms of trademarking and intellectual property being pirated; if just the copies of computer programs, including operating systems, were legitimized world-wide the taxes collected on the income would pay off the entire U.S. national debt in a decade. Even without the financial support politicians receive from content and merchandise suppliers, we can see why Congress was so gung-ho about SOPA and PROTECTIP.

If every video that contained unauthorized material were removed from YouTube it would be reduced to little more than some home videos and promotionals. That third party music slide show video you watched the other day probably involved dozens of infringements: the music and most, if not all, of the pictures. Its creator asks: "Have you ever tried tracking down those who took 36 different unattributed photographs you found on the internet?"

To say that this was a divisive issue is an understatement. My sister, Pearl Gray, was a stalwart supporter of the bill. Like most internauts, I was appalled by it. This disagreement threatened to ruin our family's celebration of Squirrel Appreciation Day today, January 21st.

Anything that can be stored electronically can be either downloaded directly from sites like FilesTube or file-shared as torrents from venues such as PirateBay or Isohunt, assuming there are seeders.

Once saved, movies can be watched on one's monitor or on one's television by transferring the file to a flash drive or external hard drive and viewing it either directly, if the TV has a USB port, or through PlayStation or a Media Player. If we missed Season 3, Episode 12 of our favorite show we can search for it (e.g. "Two Baroque Girls S03E12") and, within 90 seconds, we're downloading it. 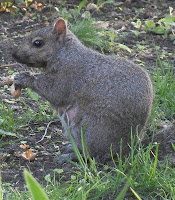 Let's remove the freedom of speech issues (which Pearl labels "a smoke screen") and focus on copyright issues.

Pearl's position is simple: "This is theft."

That is true only if there is no explicit or implicit consent from the creator. Suppose you're at a party and start dipping into the food without a voiced invitation to do so from your host. Is that "theft"?

A friend of mine had a hit song or two in the 1960s. She hadn't collected a dime from it in decades. A while ago, royalty checks started arriving. When she asked her agent about it he asked if she'd searched the title on YouTube recently. Sure enough, she found copies of it there, explaining the sudden surge in sales, mostly to nostalgic listeners. None of these videos were authorized, of course, but the copyright holders--publisher and artist--were delighted by the attention.

By contrast, other artists--especially those still earning income from their works--comb YouTube, torrent and direct download sites daily, getting webmasters to remove the videos and links. These people object to having to make this effort, saying that the system is like "negative option marketing", where an asset is taken from us unless we object.

Does it matter if the person taking the item does or does not use it for commercial purposes? Not really. The issue isn't the pirate's ability to make money; what matters is whether or not the artist can--an opportunity limited by anyone else distributing it.

"The solution is to respect the law," my sister argues. "If you want to use someone else's property ask for their permission! What's the problem?"

Well, the problems are too many to list. There is the issue of access: what if you can't find or contact the copyright holder? Once you do, what if they don't respond? Qui tacet consentit? That is, does silence imply consent? Are the artists too busy to reply to the thousands of requests they receive? As with party snacks, doesn't the fact that the file is there suggest that its owner doesn't mind you taking it? Doesn't exposure to previous work increase the prospects of the artist's next one? More to the point:

"How can we have an Information Age if most of the sources are protected from use?"

Pearl suggested a central database where those who want their material protected could register their titles. This works on YouTube, where one posts a music video, the site finds the signature on the music file itself, checks its database for restrictions determined by the copyright holder, and tells the poster which countries--Germany is especially strict in this regard--will block the presentation from its citizenry. On direct download or file-sharing sites, though, this would be a waste of time and effort since the files are not played onsite.

Does "postponed" suggest that SOPA and PIPA will return in some form or another? Count on it. Predictably, it will be more specific in targeting the files themselves rather than the sites. My guess is that it will involve absolute prohibition for newly released material and negative optioning for the remainder of the copyright period. A book, song or movie released in the last, say, three months could be reported by anyone to the domain registry and/or the ISP. After that [three month?] period the copyright owners would deal with the offending site, involving ISPs, domain registers and, ultimately, the courts only if the sponsoring venue fails to act.

In the end, it's all about creating icons in a culture that has 1,000 television channels and sees dozens of feature films, books and songs released daily. Contemporary masterpieces have to be able to rise above all this noise and bustle; strict adherence to copyright impedes that process. Taken together, the Internet, copyright concerns, media, artists, fans, critics and looky-loos create a broth of contradiction, conundra and paradox, even within the poetry community, where a great poet can become well known without ever publishing anything or making a personal appearance anywhere.

People raised in the Internet Age expect everything they find online to be free. This has the net effect of exporting the content's largely American values and viewpoints. Inevitably, this will find its way into the law of the land. Not before SOPA and PIPA, though.
Posted by Earl the Squirrel at 1:00 AM