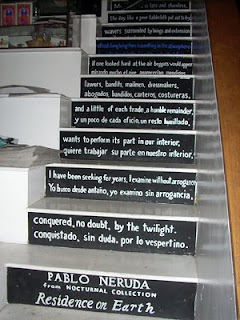 What is "commercial poetry"?

To many, it is an oxymoron:


To others it is an anachronism, harkening back to a time when poetry was in every newspaper and magazine, when poets were like today's rock starts and a person could make $500,000 from one poem.

Commercial poetry is defined as any verse or free verse written for and marketed to an audience beyond poets themselves. While the expressions are hardly interchangeable, commercial poetry is often associated with popular and even traditional poetry. It is distinguished from "poets' poetry", which is related to "academic" or "literary" poetry--the kinds found primarily in books, literary magazines and webzines. Typically, novice poetry is writer-centered. Poets' poetry is, by definition, writers-centered. Commercial poetry is audience-centered. Among its many types are:

If you dream of winning a Nobel, Pulitzer or Griffin Prize you are a literary poet. If you fantasize about winning an Oscar, Emmy or CLIO, you are a commercial poet. Do you submit your work primarily to art-related publishers? Or do you seek an audience larger than the average tea room?

How can both sets of facts be true?

The answer lies in how precisely we use the terms "poet" or "poetry". If we are talking about "literary poetry", the stuff we read in existing e-zines, magazines and books, the first list pertains. Only when we use the broader, dictionary definition of poetry does the second set of facts come into play. The nursery rhyme, the advertising jingle, the songs we listen to on our radios and IPods, many of the slogans we see on bumper stickers, greeting card doggerel, these are all poetry. N.B.: No one specified good poetry. Yet.

Shakespeare's Sonnet LXXIII needs no defence. It might be a consensus choice as the greatest poem of all time. Nevertheless, the jingle has considerable technical merit, too. Note the effective "w" alliteration, the perfect vowel-by-vowel rhyme of "yellow went" and "Pepsodent", the metronome-breaking anapest starting L2, the positional assonance of short and long "u" sounds in the first foot of each line and the repetition of "r" sounds in the ensuing syllables, "-er where" and "your". All of these may explain why, despite our best efforts to lose it, this jingle sticks in our minds long after we've forgotten others of that ilk and era.

Both poems are masterpieces of their genres. Before you guffaw at the notion that they are equal, consider the viewpoint of the sponsor and ask yourself: "How many tubes of toothpaste did Sonnet LXXIII sell?" Each genre has its own aims and poems can only be judged based on their success at achieving those targets. Even if we believe one genre inherently superior to another we must bear in mind the famous Payton-Suey joke:

Chicago running backs Walter Payton and Matt Suey were camping in the arctic. Payton dashed into their tent and began hurriedly donning his track shoes. Suey asked what was happening. Payton explained that a hungry polar bear was on its way.

"I don't need to," countered Payton. "I just need to outrun you!"

The key words are imagination and initiative. There is a story told in some detail of a woman who made custom greeting cards to order. Just before major holidays she would set up a kiosk in an area heavily trafficked by forgetful, procrastinating business people (there's another kind?). The customer would select a floral design and a poem before the recipient's full name was entered into a laptop. Why the full name, when only the first will appear on the card? Because before printing it out the lady could warn the customer that someone had already bought that same card for that person--maybe even that same customer the year before! (I did say "forgetful", right?) The entrepreneur would fold the paper, fresh out of the printer, into a card and then, as a final touch, scent the envelope to match the floral design. The lady charged an exhorbitant price but, because the recipients loved the cards so much, no one complained. When you clear $4,000 on a Valentines Day lunch hour you really don't have to work more than a week or two a year.

We shouldn't assume that commercial poetry appeals only to non-poets. The greatest commercial poet of all time, William Shakespeare, kept the Globe and Blackfriars theatres alive selling [dramatic] poetry into a population decimated by the bubonic plague.

Granted, most commercial poetry is trash but Sturgeon's Revelation, "90% of everything is crud", rules commercial and literary poetry alike. Is this a problem or an opportunity? The cultural "attention deficit disorder" that Edward Hirsch mentions requires that speech be expressed in sound bytes. How can this need for compression be anything but good for poetry?

To quantify this gaping opportunity consider this question: "Does any lyricist believe s/he can't write better verse than Bernie Taupin?"

Quality survives, especially in commercial verse. Leonard Cohen's earliest songs (e.g. "Suzanne", "Bird on a Wire") are still being played on the radio. Does anyone under 50 know or care who The 1910 Fruitgum Company or Grand Funk Railroad were? Look at how many theme songs are written by the greatest lyricists of our time: Leonard Cohen, Bob Dylan, Buffy Ste. Marie, etc. The right song can help make a film (e.g. "The Rose", "Moon River", "White Christmas", "Up Where We Belong", "Windmills of Your Mind", etc.). This explains why these authors usually want a percentage of the gross. Would you rather have $100 from this film and $1,000,000 from the next or a flat $1,000 from all of them? (That $1,000 isn't a figure plucked from air; it is exactly what John Stewart made from selling the recording and television rights of "Daydream Believer" to the Monkees.)

Persistent is the notion that "academic" poets are more technically sound than popular ones. Indeed, this used to be true. For example, T.S. Eliot and Ezra Pound were infinitely superior prosodists to Robert Service and Edna St. Vincent Millay. Since then, though, practical commercial poets continue to study the basics while MFA, MA and PhD students graduate without knowing even the most rudimentary aspects of scansion, jargon or technique. The tortoises have left the hares in the dust.

Are there other fundamental differences between the two cultures, commercial and literary? Certainly, not the least of which is the fact that there is no commercial poetry culture. This is less a reflection of their sparse numbers than their:

Clearly, there isn't the sense of tshinanu that we see among the literaries. Perhaps owing to the fact that other poets are not their audience, blurbing is a concept foreign to commercial poets.

New technology can be viewed in any of three ways:

If we accept poetry as primarily an audiovisual art form, today's successful poet needs to employ other skills, beginning with the ability to perform. Photography, film/video, slide shows, web design, music and promotion are some of these other avenues that may need to be mastered or achieved through networking/collaboration.

The academic poet treats readers like peers or students, expecting a greater appetite and a more fungible definition of poetry. They believe in bulk. Theirs is the poetry book, 'zine or reading. Some will enjoy an occasional slam or open mike. The experience becomes a collage that overloads the senses: an elegy is followed by a bawdy tale, a parable, a joke, then a rant about depersonalization. Audience members feel like foster children being bandied from home to home, or like teenagers learning about the evils of tobacco/alcohol by being forced to smoke/drink until they vomit. The poems blur and compress like disparate movie trailers.

By contrast, commercial poets seem to adopt the "less is more" philosophy, preferring that a poem be isolated from other poems but not from other art forms (e.g. music, theatre, film, etc.).