Let's take a break from our usual banter to take a look at some technical questions. If you find such discussions too dull for the blogosphere please don't hesitate to say so. We'll start with this one: How is a listener able to discern blank verse from an unmetered string of iambs (and substitutes)? Herman Melville's "Moby Dick" has whole paragraphs of the latter:

"I leave a white and turbid wake; pale waters, paler cheeks, where'er I sail. The envious billows sidelong swell to whelm my track; let them; but first I pass.

Yonder, by the ever-brimming goblet's rim, the warm waves blush like wine. The gold brow plumbs the blue. The diver sun -- slow dived from noon -- goes down; my soul mounts up! she wearies with her endless hill. Is, then, the crown too heavy that I wear?"

How does the ear distinguish this iambic prose from, say, Shakespeare's "Romeo and Juliet"? How does it discern that Pound's "In a Station of the Metro" is free verse...

The apparition of these faces in the crowd;
petals on a wet, black bough.

...and not enjambed iambic pentameter (i.e. with a lame foot after the semicolon)?

The apparition of these faces in
the crowd; petals on a wet, black bough.

Let me deconstruct the question for clarity:

The short answer is that something happens at the end of each line. 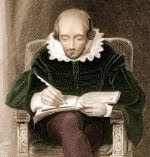 "Beowulf" was written as one long string of text, metered accentually. For convenience, we'll confine our discussion to accentual-syllabic verse. Let's examine some strategies, listing them in rough descending order of frequency, for forming feet into meter without using rhyme. To demonstrate the ubiquitous nature of these techniques--to say nothing of the genius of the Bard--I'll draw all of my examples from Mercutio's speech in "Romeo and Juliet", Act I, scene IV.

1. Poem length. It takes blank verse more time to establish and confirm its meter than rhyming verse requires. Not surprisingly, almost all blank verse is sonnet length or longer.

2. Rhythmic attenuation. Lines "find the cadence", the poet front-loading most of the noisy substitutions, especially inversions (i.e. trochees, in this case). Acephaly and, to a lesser extent, anacrusis are more common than catalexis or hypercatalexis (which is rarely more than a shwa-based semi-syllable in blank verse).

The trochaic inversion is followed by four perfect iambs.

3. Endstopping, partial and full. Completed phrases and/or punctuation end each line. All other things being equal, blank verse tends to exhibit slightly less enjambment than rhyming verse. In this excerpt we see every line ending in punctuation: colon, semicolon, period or comma.

Through lovers’ brains, and then they dream of love;
O’er courtiers’ knees, that dream on court'sies straight,
O’er lawyers’ fingers, who straight dream on fees,
O’er ladies' lips, who straight on kisses dream,
Which oft the angry Mab with blisters plagues,
Because their breaths with sweetmeats tainted are:
Sometime she gallops o’er a courtier's nose,
And then dreams he of smelling out a suit;

4. Breath pauses. Poets create enough--ten, generally--distinct, unpunctuated syllables to force a breather at the end of the line.

And being thus frighted swears a prayer or two

If "being" and "prayer" were not compressed this line would be twelve syllables long. Meanwhile, the sibilance and long vowels contribute to the actor's need to come up for air after this unbroken line.

5. Echoes other than rhyme. Sonic devices (e.g. assonance, consonance, alliteration or, to cheat a little, pararhymes) end the lines.

Of breaches, ambuscadoes, Spanish blades,
Of healths five-fathom deep; and then anon
Drums in his ear, at which he starts and wakes,
And being thus frighted swears a prayer or two
And sleeps again. This is that very Mab
That plaits the manes of horses in the night,
And bakes the elflocks in foul sluttish hairs,
Which once untangled, much misfortune bodes:
This is the hag, when maids lie on their backs,
That presses them and learns them first to bear,

The assonance of "blades" and "wakes", "Mab" and "backs", "bear" and "hairs", along with the alliteration of "bodes", "backs" and "bear", demonstrate how the repetition of sounds announces the ends of lines, albeit less conspicuously than rhymes would.

6. Irregularities. Enjambments pose a challenge that can sometimes be handled with either sonic surfeits or metrical irregularities at the start of the subsequent line.

And sometime comes she with a tithe-pig's tail
Tickling a parson's nose as a’ lies asleep,

The trochaic bump, "tickling", and the tongue-twisting overalliteration of "tithe-pig's tail tickling" combine with the lack of punctuation (see #4, "Breathe pauses", above) to force a tiny lacuna after "tail".

7. Classical diaeresis. This, the rarest and most subtle of these techniques, involves using cadential words (e.g. iambic words in an iambic poem) at line or stanza breaks. Here we see that "asleep" and "anon" are the only iambic words in the whole section. They come with a sense of finality, even though neither ends a sentence.

Which oft the angry Mab with blisters plagues,
Because their breaths with sweetmeats tainted are:
Sometime she gallops o’er a courtier's nose,
And then dreams he of smelling out a suit;
And sometime comes she with a tithe-pig's tail
Tickling a parson's nose as a’ lies asleep,
Then dreams, he of another benefice:
Sometime she driveth o’er a soldier's neck,
And then dreams he of cutting foreign throats,
Of breaches, ambuscadoes, Spanish blades,
Of healths five-fathom deep; and then anon
Drums in his ear, at which he starts and wakes,
And being thus frighted swears a prayer or two


"But virtually no one writes blank verse anymore," one could say, "so why is any of this important?"

Verse is making a comeback. Granted, it is almost exclusively rhymed verse but look at the nature of those rhymes. As modern metrists move toward more and more imperfect rhymes the importance of these other meter-markers rises in lockstep. Regardless of circumstance, they identify the poet as a master of the craft.

Posted by Earl the Squirrel at 2:33 PM