If poetry came back to life today it would find itself declared "missing and presumed dead" in 1973, its spouse long remarried, its possessions gone, its photo gathering dust in the attic, and its children contemplating retirement.

Before we get to that, though, we need to do a little housecleaning.  Poetry being alive or dead is determined by the demand (tind) for unaccompanied contemporary¹ English language poetry.  We are acutely aware of its gross oversupply and verse's success in other cultures and media (i.e. song lyrics).  If we cannot cite a single iconic poem written in the last half century the matter is settled. 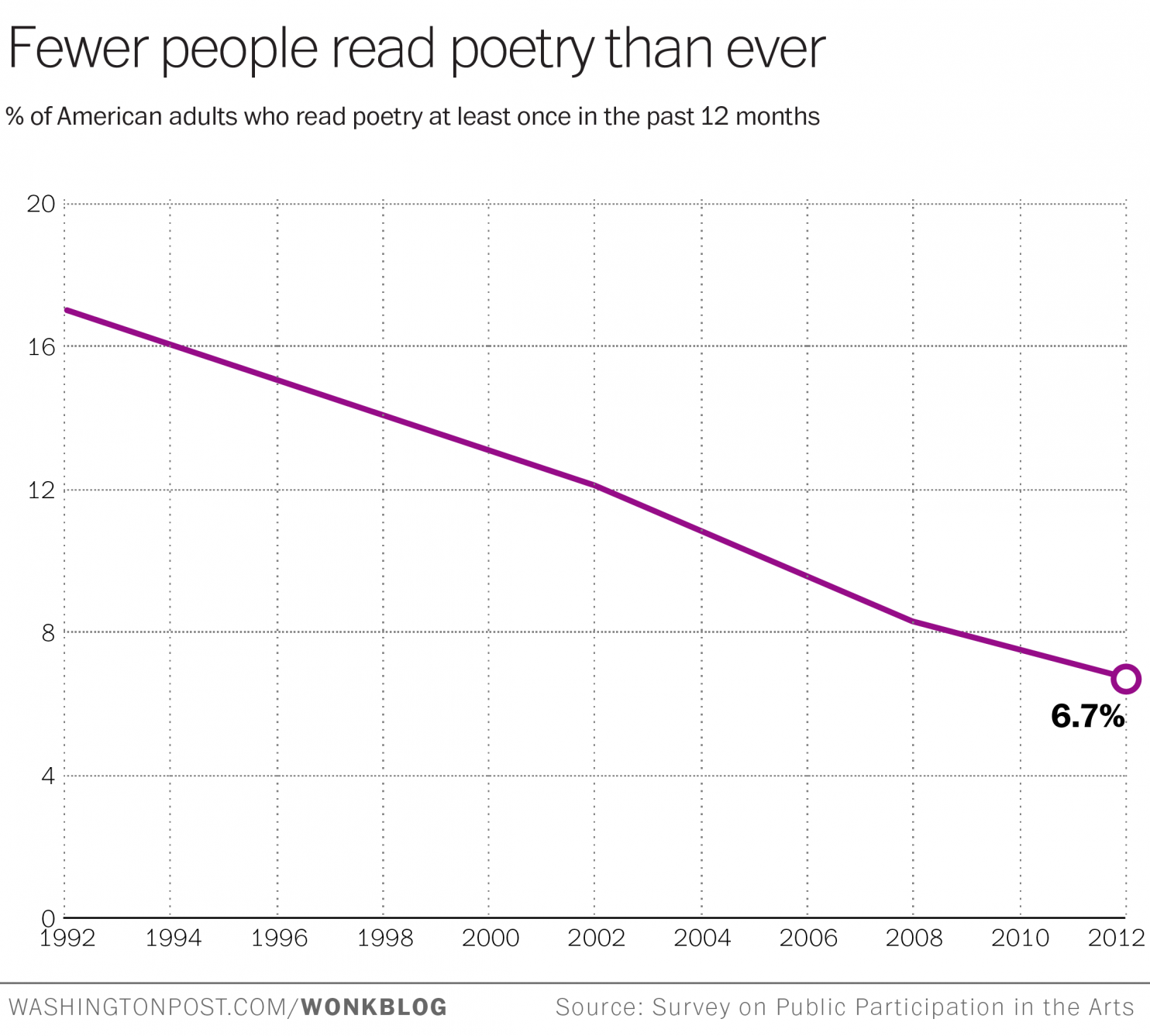 The first chart shows a steady decline from 17% to 6.7% over the last twenty years.  The problem is that the survey asks about poetry, not just contemporary poetry.  Most, if not all, of the decline is in classical works (if only because interest in contemporary poetry couldn't get much lower).  My guess is that the verse of William Shakespeare, the Brownings, T.S. Eliot, Dylan Thomas, and Robert Frost will always outsell the texts of Charles Bukowski, Maya Angelou, Carol Ann Duffy, and Billy Collins by a factor of sixty to one but let's go with a ridiculously conservative estimate.  Let's say it's only six to one.  That means that less than 1% of the population reads contemporary poetry, a figure about equal to the number of those producing it. 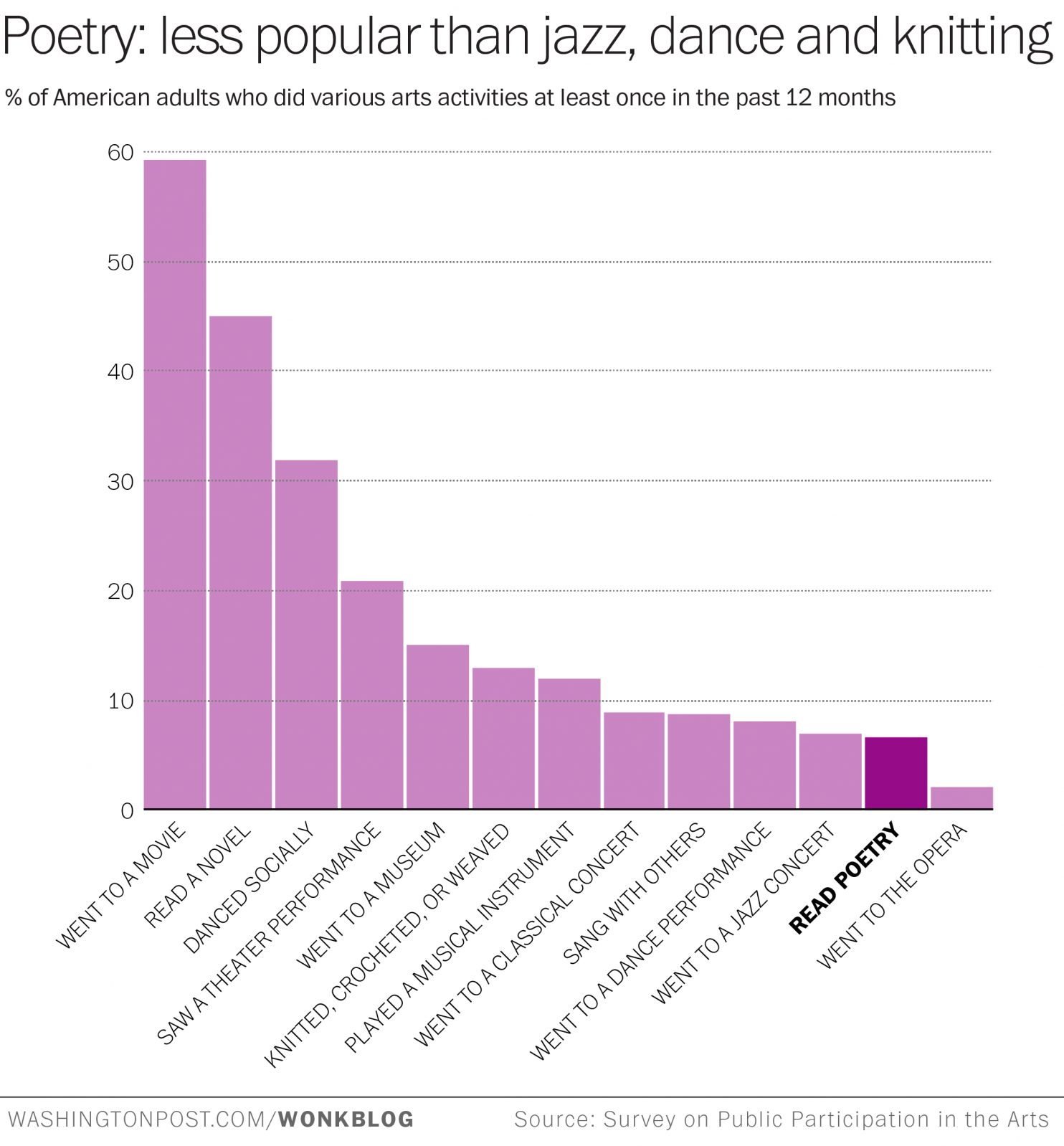 The problem with this second chart is that categories are being compared to subcategories.  For example, why are jazz and classical concerts separate categories?  Leaving aside the fact that we're switching eras, cultures and languages, comparing a superset like poetry to a subset of sung storylines like opera is as ridiculous as comparing movies or novels to glosas.  Even if we only include rock operas (e.g. "Tommy", "The Wall"), forgetting musicals (why?), opera is viewed by many times more anglophones than poetry.

As the article says, the "decline in poetry readership is unique among the arts."

I would have said "unique in human history" but "among the arts" will do. 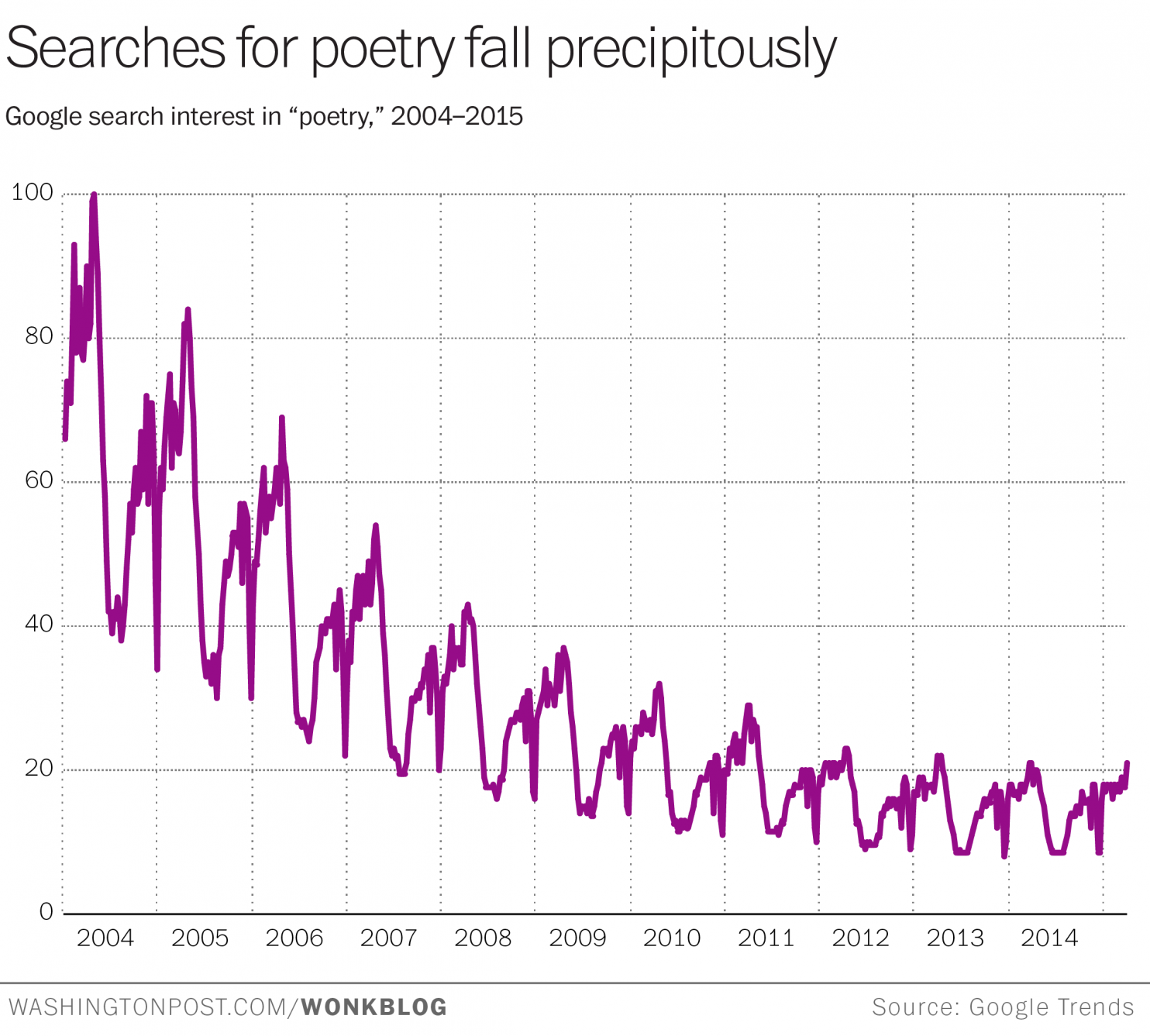 Fluctuations in the third chart "follow the contours of the academic year", which "suggests that much of the online interest in poetry is driven by students looking for help with their coursework, rather than adults reading it for pleasure."

This is crucial because students are, essentially, a captive audience.  To argue that poetry is alive (or that a volume of it is well received) because 10,000 students are obliged to purchase the same textbook is ludicrous.  By this "reasoning" the world's most popular pastime would be paying taxes.

When applied to poetry, such web searches will become less relevant.  Those few who read poetry are unlikely to Google it;  they will click on links in social media, emails, referrals or bookmarks. 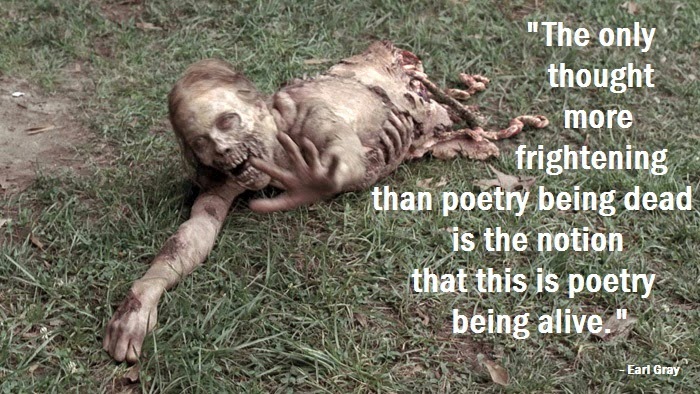 These charts tell us that today's poetry is dead and earlier verse is fading at an astonishing rate.  Of course, some will ignore what has been proven and blithely continue pumping artless dreck into the void, causing us to find some relief in the fact that Nobody Reads Poetry.  Deniers will go on writing and publishing disingenuous nonsense like Robert Peake's "US Poetry Readership in Tens of Millions?²".

As for the rest of us, rather than show contempt for contemporary poetry by stonewalling its demise, we will work to reincarnate it.  Otherwise, we might well see all English language poetry go the way of whist³.

¹ - We are interested in earlier poetry as an extension of our primary concern.  One particularly silly blogger (who cut off comments for lack of supporting argument) actually wrote:  "if you have to keep declaring, over and over, that poetry is dead, it can’t actually be dead."  Substitute the name "Elvis" for "poetry" there.  As long as there are climate deniers there will be scientists, armed with indisputable evidence, here to tell us the truth.

Speaking of veracity, when confronted with the demonstrable and obvious why do so many otherwise intelligent poets react like Fox News truthers?


³ - A pastime replaced by contract bridge at the same time music on the radio replaced poetry.