The Show Part I

In response to a previous post one of my favorite humans asked informally:  "But how do you encourage readers if the poems are intimidating, so intellectual, full of literary references that are over the heads of many except the poet's peers?"

Have you ever seen a dog show?  If not, here is how they work:

Dogs compete for "Best in Breed":  the finest Jack Russsel Terrier, Basset Hound, Toy Poodle, whatever.  These winners compete against others in their category to win "Best in Group".  Finally, the representative of the seven groups square off for "Best in Show".

People assume that the overall winner, "Best in Show", is what it's all about.  Not necessarily.  Many owners are quite happy with "Best in Breed" because that is what matters in breeding decisions and because, quite frankly, most owners of, say, Afghans feel that Afghans are the only dogs worth mentioning.  Fans cheer on the breed they've owned and lose interest when that one is eliminated.  Korzoi owners may not be able to cite the last ten Westminster Kennel Club "Best in Shows" unless one of them is a Korzoi.  Best in Group is merely a ticket to the Final and the Final is gravy, affecting only a few dogs.  In a sense, everything after "Best in Breed" is an apples-versus-oranges comparison.

Here is a list of the seven groups, along with their number of Westminster "Best in Shows": 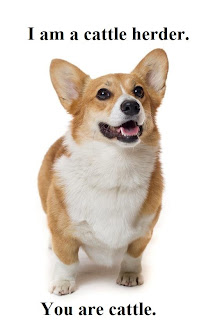 Advertisers and moviemakers usually have a certain photogenic breed in mind.  The Herding Group's Old English Sheepdogs, Corgis and Australian or German Shepherds fare much better in casting calls than in Westminster.  Again, this shows how "Best in Breed" can matter more than "Best in Show" (setting aside the fact that you must win the former to qualify for the latter).  Still, fans of that group might wonder what's going on with the judging.

Poetry operates similarly, except that the reader defines the breeds.  The lines can be drawn along thematic, genre or formal lines.

"Oh, a poem about peaches.  I love peaches!  Great poem!"

How the "breeds" are defined doesn't matter.  The poet's job is to be the best contemporary poem of that type.  As an example, people who read  Carolyn Forché's "The Colonel" may consider it good until they read DPK's "Beans".  For many, the clumsiness of "There is no other way to say this" and the risible ear-to-the-ground image doesn't intrude until they encounter the infinitely superior "Beans".  It's like a never-ending talent show where better efforts replace their predecessors in the leader's circle.

If only for variety, we'd expect publishers, individually and as a whole, to pay proportional attention to the best romantic, comedic, dramatic, elegiac, political, literary, and philosophical pieces.  In practice, many concentrate on the latter few to the exclusion of the more popular types without considering themselves niche publishers.

Imagine if dog shows did not allow the appearance of three or four entire groups.  What kind of sampling, showcase, or competition would that be?

Posted by Earl the Squirrel at 7:17 PM