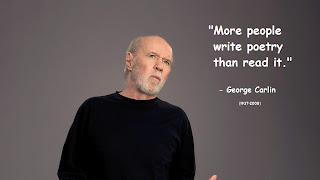 The PoBiz is all about numbers.  Creative Writing professors need to sustain enrollments for their department to thrive.  Raising entrance or academic standards would be a step in the other direction.  Their interest, then, lies in convincing students, prospective or current, that they can become writers.  Not readers or literature fans in general, mind you, but writers.  The number of Yale English graduations has declined by 62% between 1991 and 2013.  Between 1971 and 2013, the number of Creative Writing degrees has increased by 908% while the number of programs has increased by about 500%. 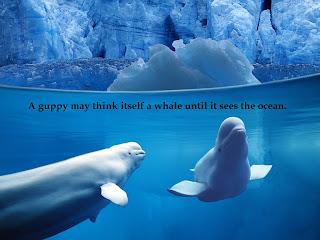 The registrar's ally in this endeavor is the academic/literary press.  If you are an editor of such a venue you have two numbers problems.  First, you need subscribers.  A century ago, this meant readers.  Today, it means contributors, past, present and aspiring.  To succeed as an editor, then, you need more and more poets--something that universities and online forums provide in droves--who wish to see their words in your publication.  Thus, when we hear editors say that they are looking for "new voices" they really mean "new subscribers".  Oddly, money isn't always the issue.  Many subscriptions might be payment for articles or poems used.  It's about numbers.

As for the poetry, it is like vacation pictures:  of no interest to anyone beyond family and friends, few of whom will venture to read any of the other poems in the publication.  The bios and, of course, the index are of far greater import than the verse.  When announcing the publication of cousin Pat's poem be sure to include the page number or, if online, a direct link to the poem, as opposed to the webzine.

Not surprisingly, when we ask such people who the best contemporary poet is they ignore the singular, "poet", and give us a list of "greats" long enough to fill a telephone directory.  Clearly, it is in their interest to convince us that there are hundreds of living William Shakespeares and Margaret Ann Griffiths.

"Why, everyone can be a poet," they seem to argue, "in a few easy lessons and with a boost from some co-operative publishers."

What of the calibre of poetry, though?

The editor's second concern is about finding enough poems for the next edition.  Given hundreds, if not thousands, of submissions from such diverse authors, that should be a breeze, though, right?

Assuming you don't have an eidetic (i.e. photographic) memory and assuming you understand that "forgettable poetry" is an oxymoron, take a moment to count the number of poems of the last decade, 2001 to 2010, from which you can remember snippets.  Divide by ten for an annual figure.  If you're lucky, then, you and every editor like you will remember three such poems per year.  You can now appreciate the "quantity of quality" problem:  periodicals have more than 3 poems per issue!

As Jack Underwood said:  "You will find less than five really good poems." 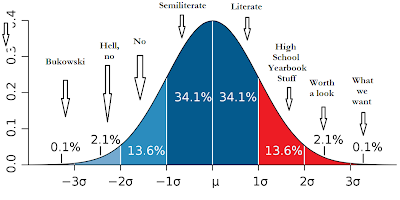 See that 2.1% in red on the right of the diagram that is "worth a look"?  A century ago, when poetry was still part of people's lives and most Grade 6 graduates knew basic scansion, this section would have offered a lot of publishable, if not great, verse.  Today, with MFA grads not knowing iambs from trochees, this is your slush pile.  Yes, you publish most of your work from this (or from solicited work of similar quality) but you do so reluctantly.  Chances are it is weighty prose from those who believe that "only ideas are poetic" and who don't mind if there is "only a bit of 'craft' in 'art'."  If they existed, this sludge would probably cost you more readers than would be gained.

Readers and critics, including those who inhabit online workshops, come from a much simpler environment.  Verses are either good or bad, perfect or worth revisiting by the author.  It is easy for us to disparage the stuff being put out, especially if we haven't seen what was put aside.  In all of my experience as an editor I saw one poem that came close to the .1% and one that barely made it.  Everything else was a compromise.

We will all sleep better if we don't think about what the average submission looked like.