From "Hype Versus Buzz - Introduction"

"Call it crude, scattered, unmanageable and often unmeasurable, but the democratization of speech has shifted influence from hype to buzz.

"What will this mean for the arts in general, poetry in particular?" 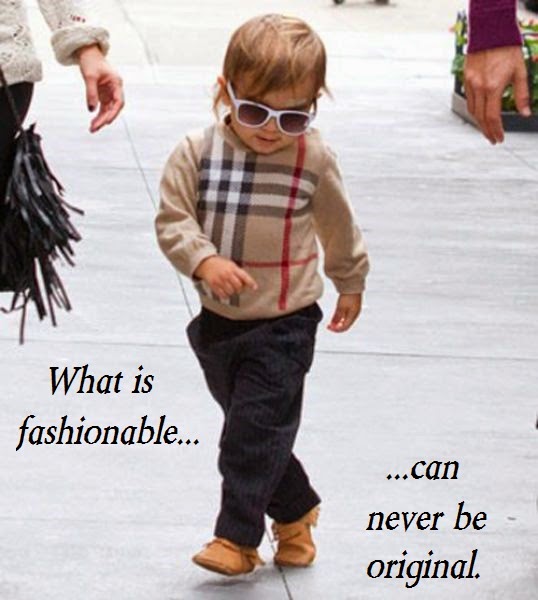 Are icons good or bad for an art form?

Both.  In the decades after payola, radio stations hyped superstars because they brought crowds of listeners and defined categories.  The radio show that played the Rolling Stones would not follow them up with Hank Snow.  Same station?  Maybe.  Same show?  Certainly not.  For better or worse, household names give us a common culture, something two strangers can discuss on an long flight.

However, even as icons helped the art form's bottom line, they almost destroyed it aesthetically.  Talented songwriters and performers like John Stewart¹, Ferron and, later, Alison Kraus were largely overlooked in favor of actors who didn't even play instruments:  most of The Monkees, The Partridge Family, etc.  These were the "artists" being hyped.  As we were to learn, what succeeds in a 3-network television world doesn't work so well in today's 1,000-channel universe.  Instead, we have the "budding star" talent shows which, if nothing else, are based on actual performance. 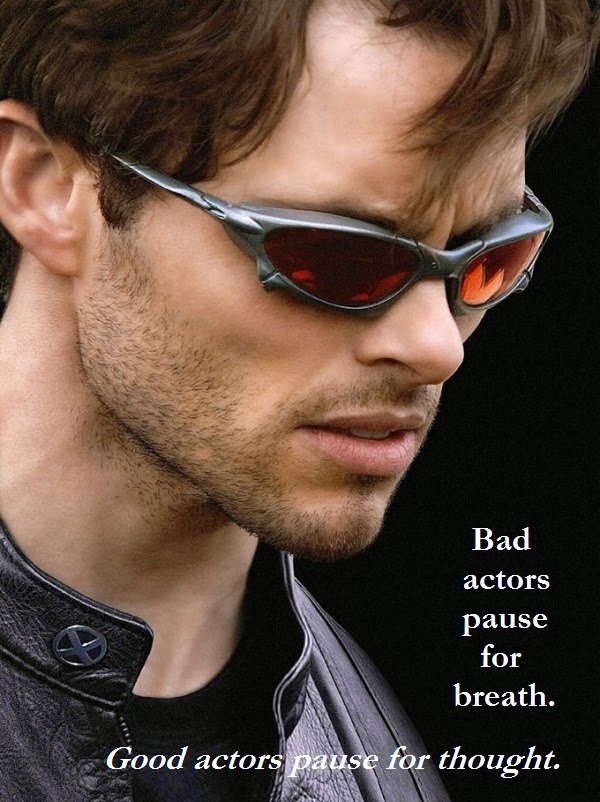 It's movie night.  You've already watched all the blockbusters so you type "top 100 movies 2013" into your search engine, scan the lists, read the reviews, and follow one of the recommendations.  In doing so, you have demonstrated the value of the aftermarket and the buzz that fuels it.  Please hold that thought for a moment.

Because of costs, only a few individuals are entrusted by backers to direct full-budget feature-length movies.  Inevitably, this leads to a lack of variety, as evidenced by the number of sequels.  Such large investments cannot risk their fate to word-of-mouth and reviews, especially with the need to create momentum in opening week.  This explains the unprecedented rise in advertising--especially television ads.  (Of course, hype is often a priori;  by definition, buzz, such as YouTube videos of Charlotte and Jonathan or Susan Boyle, can only come after the fact.)

At the opposite extreme is the publication of poetry in e-books and e-zines.  With few or no publication costs or returns, hype is usually limited to a blurb by a friend or teacher.  Buzz from readers doesn't materialize for the simplest of reasons:  Nobody Reads Poetry.  Verse doesn't have an aftermarket simply because, duh, it doesn't have a market.

"Publishing a book of poetry is like dropping a rose petal down the Grand Canyon and waiting for the echo." -  Don Marquis

Imagine if the fates of these two disparate ventures were to converge.  What would happen if a movie's costs were not merely reduced but eliminated?  Today, anyone can do the "Blair Witch Project" thing.  Pick a script on Zoetrope, grab your video camera, make one stop at a diner to recruit actors, another to pick up a beautician at the nearest hair salon, and you're in business!  Post the final product to a download and/or streaming site and wait for the reviews to roll in.

If even a few of these Indie efforts can make an impression on the public the film industry will face the same overproduction (in both senses of the word) problems that poetry has.  As for quality, how much worse could they be than Dennis Dugan, Steve Carr, Uwe Boll, or Michael Bay?  I'd bet we'll see the same phenomenon as we observed in poetry with the arrival of the Internet:  a hell of a lot of drivel and a few gems.  As you know, of the 21st century's three best poets and six best poems, two thirds are onliners and one third are crossovers.  There is a lot of undiscovered talent out there...but can we find it?

As film moves closer to poetry's experience, the reverse will be equally evident.  At the risk of stating the obvious, the presence of rhymths and sonics gives poetry its mellifluence, proving that it is meant to be heard, not read.  Fortunately, the formula for producing poetry videos is much the same as for feature films:  pick some text, grab your camera, a performer, a bag of weed and get to work!

Now let me ask you this:  Can you count the number of times you've seen a sign on a book store saying "Buy some words here!"?  That would be never, right?  How about "Buy some prose here!"?  No again, right?  Authors, publishers and promoters of fiction and non-fiction don't identify which mode--prose or poetry--they will employ.  Why, then, should poets? 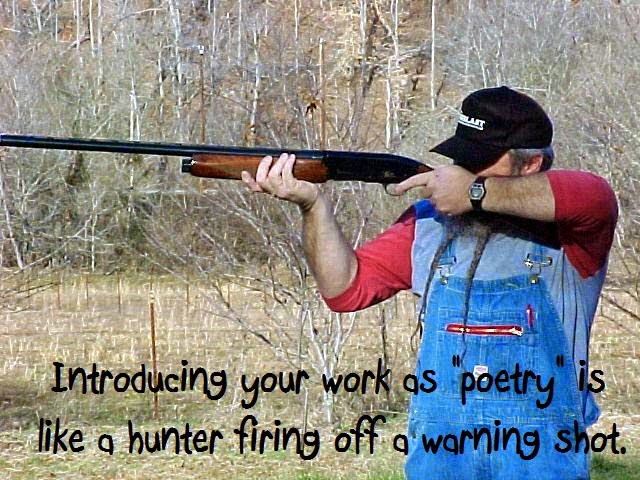 As an experiment, I'd love to write a best selling novel.  After a few weeks, I'd reveal that it is written in corata (i.e. verse in paragraphs, like this rhyming iambic tetrameter "prose").  Would the sales go up or down?  Probably neither, until it began to be described as a book of poetry.  Then sales would plummet, I'm certain. 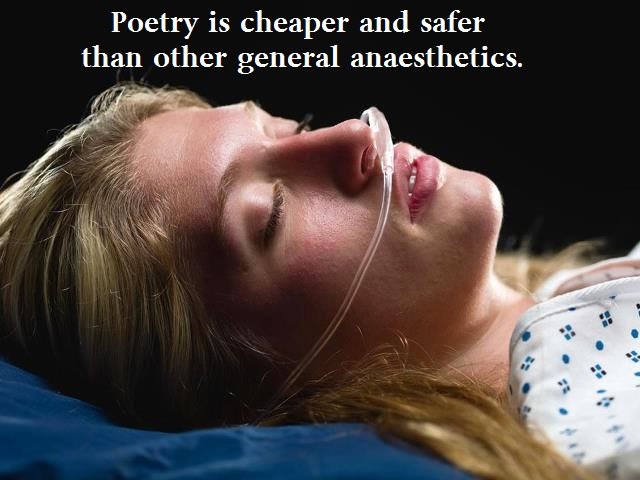 Hype is not a filter.  It is what we filter out.  People today are very good at spotting and avoiding hype, to the point of synchronizing excretions to coincide with television commercials.  As the next few years progress, artists who rely on and inspire buzz will tighten the squeeze on those depending on hype.  Directors² Jason Friedburg and Aaron Seltzer may not understand their fate--they don't seem to understand anything else--but they are going the way of the video rental store.  Canary.  Mine shaft.

In an albeit perverse sense, we poets have a one-century head start on theater, film or book promoters facing disappearing ad budgets.  It's as if Bill Gates, Warren Buffet and the Koch brothers just joined us on skid row.  True, we haven't learned how to find an audience/job yet but we certainly know how to survive without one.

Insofar as art is concerned, direct responses from audiences will be the new lifeblood, if not the new currency³.  We consumers need to stop thinking of speech as a right or privelege.  Voicing our opinions is a duty to everyone who respects them.  Friends don't let friends watch "The Hangover Part III".  Similarly, friends should not let friends miss the next "Beans" or "Studying Savonarola".

² - Can "Directors" possibly be the right word here?

³ - Some may be surprised by how easy it is to turn satisfied viewers into cash without charging them anything.  Think of Facebook, Twitter, Google, etc.

1. Hype Versus Buzz - An Introduction

Posted by Earl the Squirrel at 1:14 PM