"Why is modern poetry so bad?" - Part III

Contrary to what you hear from too many "theorists" these days, good poetry instructors are primarily scientists, not gurus.  As prosodists, they examine what has worked in the past, preferably with some calculable consistency, and record those crowd-pleasing gadgets for posterity.  They do teach magic, but in the practical sense of passing on marvelous tricks to a new generation of illusionists.  A young man once approached me after a lecture, informing me that "poetry can't be taught."  My response was terse:

What serious professors do not do is argue that poems about blue jelly beans are superior or inferior to poems about red jelly beans, or that an interpretation that proves a poem is about blue rather than red ones is a prosodic or critical exercise.  They do not maintain that didactic or philosophical poems are inherently superior or inferior to funny, emotive, romantic, dramatic, or narrative ones.  They may mention but do not dwell on inspiration, usually resorting to it in order to fill up empty classroom time.  Speaking metaphorically, they are far more concerned with pottery than potters or the wheel within the clay.

When "poets"¹ complain about how lousy poetry is they mean that it is not in accordance with their taste or, more to the point, their style.  If only the world could see that only their aesthetic is transcendent!

Needless to say, publishers and editors roll their eyes and move on.

When technicians declare that poetry is lousy they aren't stating an opinion, let alone a self-serving one.  They are stating a fact, buttressing it with statistics, trendlines, and, not surprisingly, prosody.  What is more, they are factoring in Sturgeon's Revelation, thus stating that much more than 90% of contemporary poetry is crud.  In essence, the technique freak is saying, while pointing to a graph:  "This doesn't work now and never has in the past."

The incontrovertible evidence has been listed here and elsewhere:  poetry sales going from parity to a 200-to-1 underdog compared to fiction sales;  no iconic lines, let alone poems;  concentration on poets, not poems;  blurbing rather than criticism;  no presence beyond literary magazines;  across-the-board technical deficiencies in poems and poets;  etc. 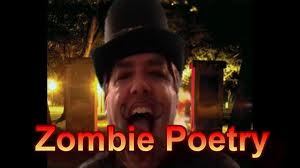 By any objective measure, including prosodic ones and especially the [over]production/consumption ratio from which cheerleaders seem to derive such odd comfort, contemporary poetry is worse now than ever before.  This is not the same as saying that "poetry is dying", something that occurred more than half a century ago.  We're not talking about palliative care;  we're talking about a rotting corpse that should be reanimated sooner rather than later.

Perhaps we should hold a funeral to give the Glee Club some closure.

¹ - By "poets" in scare quotes we mean those who don't know poetry's basics and read only their own works and those like it.