"...the players couldn't take the field;
the marching band refused to yield
the day the music died."


From "The Watermelon Problem - Part I":

Please take this Commercial Poetry Challenge:  Go to, say, Poetry Magazine and try to read the verse there without saying to yourself:  "Surely they have better submissions than this...!" followed by the inevitable "So what do they do with the good stuff?"


Venues associated with a public¹ foundation, university or arts organization are "institutionals" as opposed to privately owned "independents".  Because Nobody Reads Poetry, independents cater to people who write poetry while institutionals engage those who teach it.  Amateurs versus pros, in the best sense of the words.  Indeed, the terms "institutional", "professional" and "academic" have become interchangeable in recent years.  Not surprisingly, there is a consistency/groupthink evident in editorial and strategic decisions.

These venues provide publication credits in a publish-or-perish environment.  Every work reflects the same underlying need:  material for interpretive analysis.  Without exception, we see substance over form, nuance over prosody, what over how.  Aside from some droll puns and sly literary references, humor is absent, as are entertainment and performance value.  Tragedy and narrative are rare.  Drama and romance are verboten.  Aside from austere readings by the poet, there is no room for additional media:  performing, graphics (except for the occasional ekphrastic), video, music, etc.  One observer labeled this "business card poetry":  concise unadorned text designed to increase one's profile and opportunities.  A more charitable view is that it is serious and professional. 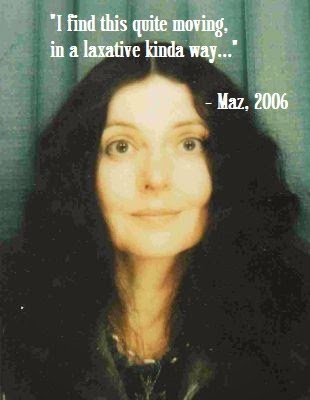 One of the inevitable consequences of the death of contemporary poetry is that those preserving the classics would create their own echo chamber.  When asked to guess the number of poets alive, one authority forgot to include anyone from the 98+% who are neither MFA nor English graduates.  Not only has the marching band taken the field and refused to yield, they don't acknowledge the existence of players.  To this day, none of the institutionals has mentioned the name, let alone the work, of the two greatest poets of our time.  When was the last time you read a criticism or review of a poet from outside academia?  If we consider poetry today and exclude those charged with judging it, not only does Nobody Read Poetry but, apparently, nobody writes it, either!

Here comes the punchline:  These are the first people to deny that poetry is dead.  LOL!

The best of the institutionals is the Poetry Foundation's "Poetry" magazine.  It is less regional than, say, university presses and has better funding than the next 100 poetry publications combined.  It forms the nexus of the PoBiz.  While we geeks were somewhat disappointed by his predecessor, Editor-in-Chief Don Share has proven to be a master of promotion, beginning with his thought-provoking links on Facebook.  He and his magazine define professional writing.   True, purists and amateurs tend to abuse him but, perversely , that is progress!  When we're talking about an art form in need of revival disrespect is better than disregard.  This guy gets noticed.

In terms of quality, institutionals maintain a very strict and narrow common denominator, achievable by all contributors.  This translates to Three to Four range on the Egoless Scale.  Occasionally we'll see a Five or Six from an exceptional poet but it will almost always be among the worst pieces that artist has produced.  In this regard, The New Yorker sets the industry standard.  With professional jealousies and territoriality running high, the Watermelon problem becomes a defining concern.  Among the many reasons for admiring institutional editors is their ability to reject outstanding poems in order to preserve the peace.  I confess that I lack the diplomatic sophistication to do the same.

Let me cite two poems as contrast.  We begin with one of the best works I've seen on a professional site in a while and a rare example of free verse (as opposed to arhythmic prose poetry or prose qua poetry):  Tina Chang's "Origin and Ash" from the Poetry Foundation site.  The challenge is to read it without saying "Wait a minute!  I have dozens of poem just like this in my 'work in progress' file!"

The piece begins with the dreaded list of unrelated objects, in the midst of which we see this 14 feet of almost perfect binary:

Were this verse we'd be complaining of the metronome.  This stretch establishes a dominant rhythm--something that would be apparent to anyone with a grounding in performance.  A more common approach is to use such strict patterning to underscore vital passages, as she does (again with an extra syllable at the end of the penultimate line) in her finale:

The short "i" sounds are nice but the last strophe of a poem is a poor time to discover assonance.  The lack of cohesion and sonics, along with the preponderance of iambs, reveals this to be unfinished verse.  This is the random jotting of lines we save in a notebook, hoping to hammer them into a poem later.  It isn't even a draft.  Rather, it is a collection of nice imagery cast wantonly onto the negligée of a narrative.  It is a Four with sprinkles.

While over-interpreters take up classroom time ascribing more and more obscure meanings to "Origin and Ash", let us examine a poem that is like catnip to geeks but would never appear in a professional 'zine. 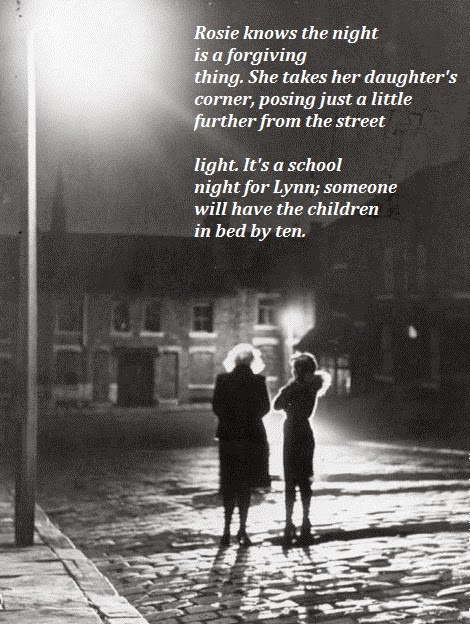 First, it's in meme format:  graphics without an accompanying text file.  This being the case, most institutional editors would see the ".jpg" file extension and not bother clicking on the picture.

Secondly, it is technically imaginative, an expression that translates to "gimmicky" among professionals.  This explains why you won't see evidence of new prosodic concepts, including curginas or cada líneas (of which this is both), in academic writing.  To wit, if we rearrange the linebreaks we see that it is iambic trimeter throughout, albeit with an abbreviated denouement.

Metrically speaking, we could say that the final rhyme, "ten" and "children", promotes the "-ren" to a lame foot.  In any case, the ending comes short and sharp.


Thirdly, the sonics, including rhymes (e.g. "street light" "school night"), don't make random cameo appearances, as in "Origin and Ash".  They begin in line 1 and remain throughout.

Fourthly and fatally, "Paradise Has No Colonies" follows the traditional fancentric aesthetic, as illustrated in Rule #12, rather than the Postmodern writer-oriented one captured in Rule #2.  At first glance, it is a sympathetic picture--literally--of a prostitute and her extended family.  The technique keeps these words in our minds and, ideally, brings us back.  Only when we examine the breaks do we see the storyline unfold with each line (hence the genre's name, "cada línea"), viewed in isolation, encapsulating a different facet of their lives.

¹ - This distinction can become blurred when, for example, owners run the publication through a [more or less] private non-profit organization.  The real test is the aesthetic/demographic they serve.

Posted by Earl the Squirrel at 2:52 PM