There is an old joke about a guy concerned about his sudden weight loss.  The doctor tells him he has a tapeworm that is impervious to all pharmacological remedies.  Not to worry, though.  The patient is told to return the next day with three cookies and a hammer.  When he does, the medico shoves a cookie into the patient, waits one minute, pushes another cookie in, waits a minute, and, ultimately, inserts the final cookie.  Then the physician waits, hammer in hand.

Finally, the tapeworm pops out, saying "Alright, where's my cookie?" 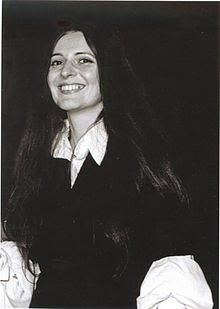 You're driving down the dullest stretch of divided prairie highway on the planet.  We're talking about a patch of pavement that makes contemporary poetry seem interesting by comparison.  The locals call it "Death Row" in honor of those who have fallen asleep at the wheel here.  Suddenly, in the ditch between the eastbound and your westbound lanes you see a light purple sign with this text:

"The world won't change for one so small"

What gives?  Soon you see a second sign of the same color, this one reading:

"that teardrops wound with gravity."

Clearly, these are related.  As you continue, another iteration appears every kilometer (i.e. every 5/8th of a mile).  After a few phrases you figure out that it is a story, a tribute to someone.

Sign #9:  When you died and the bees did not mourn, did the crickets
Sign 10:  hesitate? Did they draw long blue chords on each thigh?
Sign 11:  Did they speak? Did they say "She is gone. Face that fact."?
Sign 12:  It's the truth but, in every other sense, it's a lie!
Sign 13:  You remain, sui generis, one light that beams
Sign 14:  as the guide of my passing and mother to my dreams.

Not until the final couplet do you realize it's a poem.  Weird!

Unfortunately, by the time you discern the sonnet format and get used to reading a line every 36 seconds the damned thing is over!  You feel like the aforementioned tapeworm.  Speaking of worms, it's similar to that earworm on the radio;  you try putting the words out of your head but they keep bouncing around like dice in the cup of your skull.  What or whom was all that about?

Speaking of cups, some coffee would be an idea.  A few minutes later you see an announcement of the next exit to a service station and diner.  At the bottom, in that now-familiar pale purple, are the words:

You turn in, as much out of curiosity as caffeine withdrawal.

Once inside, you see photomemes on the wall, each depicting an aspect of the poem, its subject or author.  You sit down, order some java and discover that your paper placemat features the words of the poem, some explanatory text and a note saying that, if asked, the waiting staff will step onstage and perform the verse for you.  (That explains the microphone and tiny bandstand in the corner.)

At the cashier's counter on your way out you find copies of the book containing the roadside verses.  Motorists buy them not only as souvenirs and as gifts for readers but to help them explain the experience¹ they have just enjoyed.  Thousands of copies are sold each month by a staff oblivious to the fact that Nobody Reads Poetry.

¹ - Unbeknownst to you until your return trip, on the back of those billboards was another poem for eastbound travellers--why waste sign posts?--leading to a similar themed restaurant and gas bar on the other side of the superhighway.  Months later, two other poems replace these two.  For some reason, the locals turn down the government's offer to provide modern electronic signage which would allow unlimited, instantaneous changes.

This was part of a local initiative in conjunction with the department of transport.  Business, including tips for the talented staff, has exploded and highway fatalities in that stretch have disappeared since the plan, called "AutoMau[ti]ve", was initiated.

Posted by Earl the Squirrel at 2:13 PM