How to Win a Whitman

Poetry institutions exist for two purposes.  In order of importance, these are:

1.  to continue existing; and,

#2 is impossible without #1 and #2 isn't what many expect.  Above all, know that #2 means "to promote writing poetry" since, as we all know, Nobody Reads Poetry.

This is about production, not consumption.  If readers played any role writers would, at least, be encouraged to produce work that is engaging (e.g. as entertaining as Chaucer or Shakespeare, as gripping as Byron or the Brownings, etc.) but, aside from being seen as frivolous, this would drastically limit participation.  (If their material is any guide, most poets are not the life of the party.)  Thus, drama, emotion and humor exit the scene.

Is it any wonder that these organizations actively discourage criticism?

What inspires new poets more:  reading marvelous, audience-pleasing poetry or judge-pleasing, prize-winning dreck?  For example, which is more likely to get the greater number of people interested in writing poetry:  Maz's "Studying Savonarola" or Tracy K. Smith's "I Don't Miss It"?

If you chose the former then you misread either the question (i.e. no one said "to promote good poetry") or the crowd:  tentative prospects who would be intimidated by masterpieces.  Those of us who expect  most potential poets to read "Antiblurb" and say "I'm going to dedicate myself to learning about language. meter, rhythm, sonics and other techniques so I can wow an audience too!" are fooling [and dating] ourselves.  Rather, novices see writers winning contests with unremarkable lineated prose and say "Hell, I can do that!"  And, lo and behold, history proves they can!

"Quality?" you dare ask?  To these people there is something elitist about the word.  After all, barring a few precious flukes, most brilliancies will be created by those who know how to do so.  How is one going to create a market, let alone sustain diverse publications, promotional groups, and breathless neophytes with the one, two or three poems per annum that time will determine are worth preserving?  Can Hollywood survive on three films a year?

Enter the poetry organization.  I know from working with some of these that, contrary to popular opinion, they do not wear the mantle of "Arbiters of Taste" willingly.  If they could promote contemporary poetry writing without citing actual poems they would do so.  Unfortunately, one eventually needs to cite exemplars.  This leads to unwanted aesthetic arguments, especially from those who view themselves as underappreciated:  versers want more meter, slammers want more drama, corazoners want more pathos, and good poets demand quality (as might an audience, if it existed).  As a practical matter, the institution ducks these debates and sticks with cookie-cutter prose that even their laziest contributors can see as their own.

Lately, a few onliners have complained about a winner of the $5,000 Walt Whitman Award for first-time authors of poetry volumes.  Some of my fellow geeks were appalled at the artistic standards (or lack thereof).  They would have good reason to be so if quality were an issue.  It isn't.  Nor should it be if we understand and accept the sponsoring organization's two-fold mandate (i.e. survive and promote poetry writing).  Nor should it surprise us that the sponsor chooses judges that are well-known practitioners of this anti-aesthetic.  Given their lack of sophistication¹, these judges choose whichever collection most closely resembles their own writing (which disappoints us geeks all the more).

In the end, we can get madder and madder, but that's the way the world goes 'round.  We can either walk away or roll up our sleeves and get to work winning--or helping a protégé win--the next Whitman.

Here are some of the judges and winners:

Were there any doubt we could compare the winning work of Hannah Sanghee Park with Rae Armantrout's and Chris Hosea's to John Ashbery's in terms of form and style (but not expertise, given the experience levels).  For now, let us accept the premise, if only for the sake of argument.

The trick in 2015, then, is to write like Tracy K. Smith.  You could go the diligent route and obtain volumes of her work but critics' descriptions may suffice.  In her Wikipedia entry, Troy Jollimore is quoted as saying she is "making use of images from science and science fiction to articulate human desire and grief".  Joel Brouwer mentions that "for Smith the abyss seems as much a space of possibility as of oblivion."  Dan Chiasson mentions "issues of power and paternalism...about race".  For an actual example, one can examine the self-absorbed, cliché-festooned "I Don't Miss It".  In short, you need to produce typical nerdy teenybopper diary entries with enough overmodified pretentious nonsense (e.g. "Recalcitrant mornings", "seasons that come when called", "scamper of feeling", "climbing the walls while the hours fall", etc.) to fool someone desperate to be conned.

I must warn you, though:  It's not easy to write that badly.  The most delicate aspect is avoiding anything that hints of rhythm or sonic awareness.  The most practical tips I can give you are:

a) avoid reading your work aloud except to check that it sounds like cafeteria banter;

b) trust your rough draft² more than your revised copy; and,

c) look for "clever/cute" rather than original. 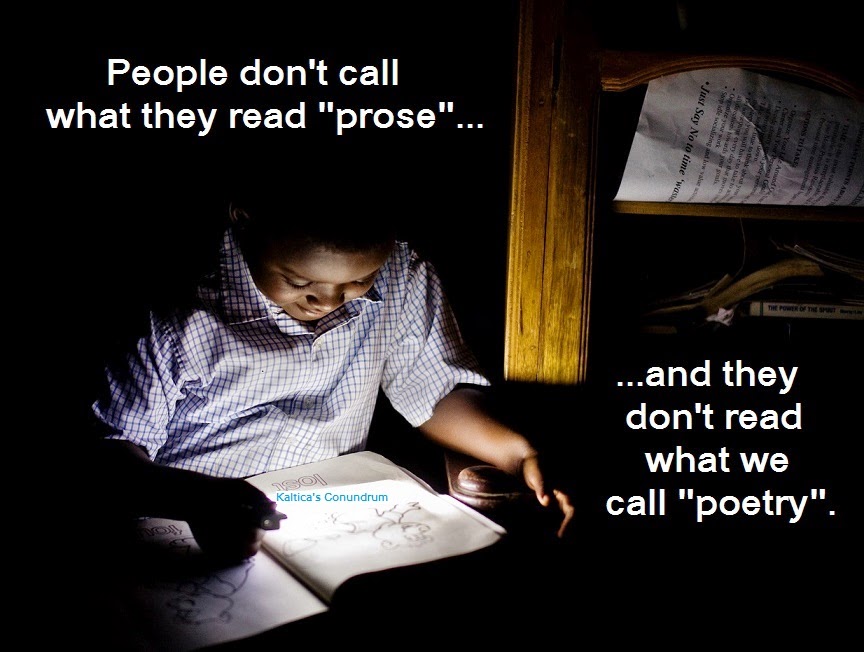 Let me end on a sobering note.  Perhaps we should stop blaming others for failing to do our job.  These poetry institutions are the opposite of Commercial Poetry and those poets, critics and onliners who endeavor to serve an audience.  Nevertheless, in the years since their formation these recruiting organizations have brought in hordes of new writers, producing [what they have been told is] poetry.  As such, they can cite thousands of success stories.

The rest of us can boast of none.

¹ - I mean this in the literal, ancient Greek sense of the word:  sophists who learned from their travels that there were effective alternative approaches.  Note that reviewers today don't bother describing the form as being "metrical", "free verse" or "prose poetry".  It is assumed that the entire "poetry" collection is prose with linebreaks.  Which it usually is.

² - Indeed, much of this text looks like it has been reverse engineered.  It's what you might end up with if you took DPK's "Joie de Mourir" and removed every stitch of poetry and continuity from it, trying to recreate the original point form notes.  To what end?  I can scarce imagine.