That's not an opinion.  It's a statistically verifiable, scientifically quantifiable fact.  Take all the songs you know.  Read their lyrics.  Recite them at an open mike, if you dare.  See how few songs work as poetry.  Aside from some verses by Leonard Cohen (we've mentioned "Famous Blue Raincoat" in this context), Bob Dylan and a handful of others, the success rate for lyrics is closer to .1% than the 10% suggested by Theodore "90% of everything is crap" Sturgeon.  No matter how small that number is, it exceeds the number of successful¹ contemporary poems (i.e. zero) by a factor of infinity.

On the one hand, saying that lyrics don't make good poetry is like saying apples don't make good orange juice.  They are entirely different media and art forms.  On the other hand, as the exemptions prove, there is no reason lyrics have to suck.  What is more, songs with substantial lyrics outlive "silly love songs".  Four decades later, "Imagine" gets far more air play than the cringefests that made the Beatles famous:  "She Loves You", "I Wanna Hold Your Hand", "I Saw Her Standing There", etc.


Aside from the video's use of multiversing, where the audio and visual verses feature parallel themes, what is remarkable about "Ruins"?  It is singing but, let's face it, it ain't opera.  It also lacks the sparkling technique and mindblowing tropes we look for in literary verse.  It ain't poetry².  Rather, it is the evocative modulation of tone, pace, pitch and volume we might expect from a competent storyteller.  It is what is missing from poetry. 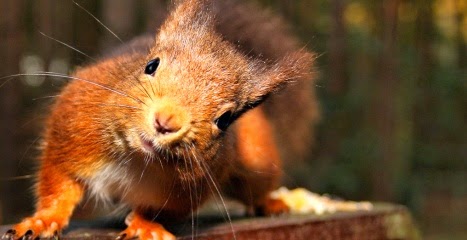 Imagine if there were no singing in "Ruins", just speech with music.  I don't mean background music, as in videos like "Beans".  I mean a song told rather than sung.  If you live where there are red squirrels--we grays are too shy for this--you have heard pairs of them doing this every spring and fall.  One makes a patterned sound, like the beatbox performer in an a capella group.  The other is the poetry performer.  Indeed, they call it "speaking song", where "speaking" can be a verb ("I am speaking [a] song") or a modifier ("Do you prefer Spoken Word or Speaking Song?").  Those who may think the two are arguing would half right;  this is part of their mating ritual.  Trust those reds to make an art form out of a lover's quarrel!

Are you, like most of us gray squirrels, glossophobic?  Here is an exercise that, among countless other benefits, can help you combat that fear without ever saying a word in public:  Pick a song that you think works as poetry.  Be sure to include performance value in your criterion.  Record yourself performing--not reading or reciting but performing--the words as if you were telling that story to friends at, say, a bar.  Aim for natural language, not the incessant screaming you'll find at a slam, the robotic monotones of the typical poetry reading, or the headbanging beat of rappers or novice verse chanters.  Listen to the playback.  Repeat until you sound like a normal human being as opposed to a poet, singer, computer voice simulation or Dr. Dre.

Once you've mastered that, try a more difficult version of the drill:  obtain, make or get a friend to make an instrumental/karaoke version of the song.  Listen to this on headphones as you record your speech.  Not so easy!

This exercise can be a form of entertainment, "poetryoke", where the idea is to perform the words as an actor rather than a singer.

Spoken songs could also evolve into a legitimate art form among humans, as it is with red squirrels.  Songwriters may write their verses with an eye toward dramatic performance--speaking--rather than singing.  The notes might exist only in the author's imagination--the piece might never be produced with singing--but the melody could hover like a ghost in the audience's mind.

¹ - As measured by those who can recite it.

² - That is, at first blush, it ain't what many would consider great poetry.