As defined in our original article, wordshopping involves a short poetry writing tip followed by an open mic and, ultimately, a 5 to 10 minute session where an experienced acting coach helps one of the open mikers reprise and improve their performance.

I just read a report on a wordshop run by a Facebook friend.  Things are going well there but mostly because, by his reckoning, he has been fortunate.  He had looked for a liquor-licensed venue but ended up being hosted by a book store.  This turned out brilliantly because it facilitated participation by a number of people who were underaged or either religiously or personally opposed to alcohol.  The event finished at 9:00 local time so there would be plenty of time for the heavy drinkers to round out their evening at a nearby bar.  Meanwhile, his need for bodies was solved when the venue accidentally doubled-booked his event with another poetry group's.  What luck!


In order to underscore the performance aspect this particular organizer has made an arrangement with the local slam organizers allowing two people from the wordshop to be parachuted into "the 16s" (i.e. the local semifinal).  By holding its own qualifying event his wordshoppers will learn how a slam operates before going to an actual one.

What interested me most was the approach this Commercial Poetry reader took to demonstrate diaeresis.  Perhaps some of you would like to try this experiment in your classes or workshops?  Here is his account: 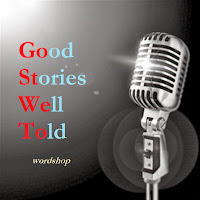 In music, we have a key note: the basic note that sets the scale for the entire song. Returning to that note often signals an arrival, an ending of a verse, a chorus or, especially if it's a sustained key note, an ending to the entire song.

We don't have notes in poetry so we need other ways to signal arrival/ending. One of these is a rhyme scheme. In many sonnets, for example, the second "B" in an ABAB rhyme scheme can mark the end of a quatrain while a rhyming couplet closes out the poem.

beneath integument snow extols
the blood and bone of remnant souls.

Another way to show that we've reached the end of a stanza is more subtle and rare. Indeed, it is a tactic so obscure that fewer than a hundred people--all of them geeks like me--worldwide know what it is. Nevertheless, it can be so effective that, in a tight contest or editorial decision, this ploy can mean the difference between obscurity and glory. It's called "diaeresis". Let me demonstrate how it works.

I'm going to recite a poem for you. It has 10-14 lines and is broken into two stanzas. I want you to raise your hand when you think the first stanza ends and the subject is about to change, much as it would between paragraphs.  I'm going to stop after every sentence and look up, if only to record the votes.  Ready?

"September came like winter's ailing child but left us viewing Valparaiso's pride.
Your face was always saddest when you smiled.
You smiled as every doctored moment lied.
You lie with orphans' parents, long reviled.
As close as coppers, yellow beans still line Mapocho's banks.
It leads them to the sea; entwined on rocks and saplings, each new vine recalls that dawn in 1973 when every choking, bastard weed grew wild."

The rhyme scheme in the first stanza was unique, ABABA, so that was no help.  Indeed, it was a red herring, since we'd expect another "B" rhyme after ABABA.  Nevertheless, no less than SIX of the eight voters were able to detect that the first stanza ends with "long reviled" before hearing the rest of the poem. I'd have been happy with two! SIX?! That's impossible! How did they do this?

The poem's rhythm is iambic: de-DUM de-DUM de-DUM de-DUM de-DUM, all the way through. Let's look at all those disyllabic words again: "winter's", "ailing", "viewing", "saddest", "doctored", "moment", "orphans'", "parents", and then "reviled". Can you see the pattern now?

Other than the last one, all of the two-syllable words are trochaic: DUM-de. The end word, "reVILED", is like a key note: it is an iambic word in an iambic poem, signalling an end to a stanza. A dactylic (DUM-de-de) word (e.g. "CON-se-quence") would have a similar "Ta-Da!" effect in a dactylic poem.