In chronological order, poetry students are advised to: 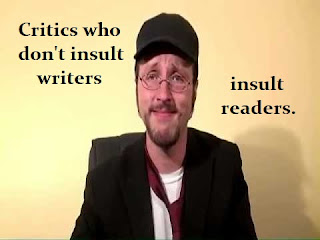 Why is critical thinking so important?  For one, you are our first line of defense against awful poety, starting with your own.  Additionally, it can prevent new poets from making a bad name for themselves by submitting their work too early.  The only thing worse than having terrible writing rejected is having it accepted (which can cast a pall on all your subsequent submissions).  Finally and most importantly, critique improves your work markedly, which explains why every one of the last ten Nemerov winners and the authors of all five of the top poems of this century come from the online workshop community.

The best places to develop objectivity and critical skills are:  Eratosphere and Poetry Free-For-All.  Of these, I'm going out on a limb--terra cognita for any squirrel--in recommending Eratosphere for newcomers, mostly because of its liquidity.  In any event, do not join up and jump in.  Read the guidelines and spectate for a few months.

When will you be ready to post work and critiques in such a group?  Here is a useful measure:  If your first thought is that people will be mean to you, you are not ready to participate.  Lurk until you understand that informed critique is the greatest gift a knowledgeable poet can offer a neophyte.

Regardless of the venue, experience has shown that this common ethos works:

Do not critique the critique or the critic.  As the Original Poster (i.e. "OP", the one who wrote the underlying poem), unless you require clarification just say "Thank you."  Do not explain or defend your work.  Do not whine about it or you being attacked or abused.  Do not tell critics that you won't be using their suggestions.

As a subsequent critic, do not underscore the fact that you are disagreeing with those before you;  just state your case.

Check your spelling, syntax, punctuation and grammar.  Take your poem as far as you can develop it before posting it for critique.  If you don't respect your work--including your drafts--how can you expect others to?

The purpose of critique is to make a poem better, the relative form of "good".  If one's work is navel-gazing emo or cryptocrap, entirely without artistic merit, there is nothing to work with and, at best, the piece will be ignored.

Critique many more poems than you post.  Note that many workshops have a formal quota in this regard.  Exceed it.  Always.

5.  Unless you intend humor, do not include a trademark or copyright notice (® ©).

That is tantamount to screaming "Rookie!" in a crowded workshop.  No one is interested in stealing your work from an area dedicated to making it worth stealing.  Among workshoppers, plagiarists are lower than the scum that forms under mole droppings.

A second sign of a tenderfoot is...the...overuse...of...ellipses.  Neophytes seem to think these add suspense rather than humor.  Somewhat more experienced poets tend to overuse em dashes--like this.  No one knows why.

Another giggle trigger is to mention your style.  Unless clumsiness counts, novice poets don't have a style and, while we're on the subject, most experienced poets don't want one.  (Apparently, the human expression "falling into a rut" isn't as sexy as it sounds.)

6.  Do not complain about insufficient critiques.

This time would be better spent solving the problem by writing critiques.

As a newcomer, no one knows your attitude towards criticism yet.  Commenters soon tire of newbies prancing in, reacting badly to comments and exiting in a huff after insulting those who took the time to tell them the truth about their writing.  (Hence the expression:  "Don't announce, just flounce.")

Bear in mind that, even in the most advanced open workshop, novices will outnumber experts by hundreds to one.  There is a Catch 22 at work here.  Just as you can't get a job without experience and can't get experience without a job, you can't fully benefit from workshopping without attracting the better critics and that requires work that is at least promising.  Towards this end, write and read a lot of critique¹.  Indeed, reading criticism¹ might teach you even more than reading poetry. 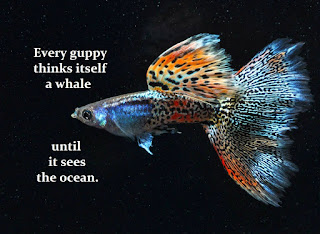 7.  Unless there are factual or continuity errors, concentrate on the writing, not the subject matter.

A workshop is not the place for debates of any sort but especially not ones that aren't about aesthetics.  [Apologies for the triple negative.]  Many online sites have separate fora for such discussions.

Avoid the interpretive unless you are trying to point out a lack of clarity.

8.  The critic is doing the poet a favor, not the other way around.

A workshop is not a showcase.  It should go without saying that you never post a published work unless you hope to revise it for republication (something you should explain up front).

That is, explain expressions and historical or geographical conditions and references to familiarize readers with things that contemporaries would already know.  See any Shakespearean script for examples.  Do not tell us about your motivation or how drunk you were when you wrote your piece.

10. As a critic, if a poem is unsalvageable or perfect do not be afraid to say so.

When your parents told you that "if you can't say anything good don't say anything at all" they weren't speaking as poetry critics.  Still, it helps to be tactful and polite. 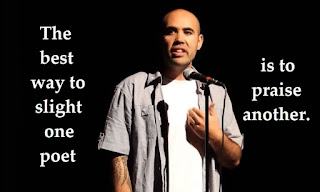 For the vast majority of poems in between these two extremes don't linger long on your evaluation;  proceed as quickly as you can to suggestions for improvement.

11.  As they say on PFFA, become one with Scavella's Mantra:

"I am probably not as good as I think I am."

12.  Neither the poet nor the critic should ever mention the critic's poetry.

As a critic, avoid doing a complete rewrite.  Leave most of the detail work to the poet.  Beyond that, all parties should observe our "Laws of Poetry" and John Boddie's adage:

"Whether or not critique is constructive depends on how
the author uses it, not on the manner in which it's phrased."

¹ - Generally speaking, among online workshoppers "critique" addresses the author of an unfinished work with an evaluation and, where appropriate, suggested improvements.  "Reviewing" is an evaluation of a completed product directed at potential end users.  This may be confusing, but the term "criticism" can refer to an academic exercise defining an established work's place in the canon or to any or all of these three types of discourse.

Posted by Earl the Squirrel at 2:00 PM