Studies will show that in large families the lower that children are in the birth order the more likely they are to appreciate verse.  Why do you suppose that would be?


There are always certain subjects best avoided.  In polite company, sex, politics and religion qualify.  Bringing up Superbowl XL won't make you friends in Seattle.  Canadians would rather forget the terrible summer beer strikes of 1982, despite the crucial role they played in their nation's sovereignty.  Don't jinx things by mentioning power outages along the U.S. eastern seaboard.

Among poets there are many taboo subjects.  These include, in ascending order of seriousness, the following, many of which overlap: Long before web browsers had video support, one of my favorite human beings wrote a book in HTML and posted it online for free public consumption.  When readers got to the part depicting a chanteuse singing in a nightclub users could click on the lyrics and hear someone play the song in the background.  As crude as it was, Internet multimedia was born!

Since then, and despite amazing advances in technology and software, poetry's use of multimedia has been disappointing, amounting to little more than videtaped slams or, worse, readings.¹  Perhaps in another decade, with all of this science, poetry will finally be as visually stimulating and entertaining as it was in prehistoric caves. 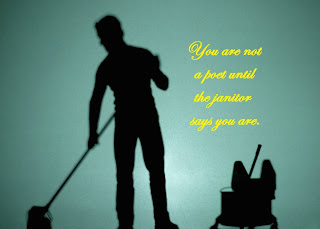 Copyright infringement, if not outright plagiarism and piracy, is the order of the day on the Internet as it was among people when poetry was at its height.  How can we promote something we aren't even allowed to perform without tracking down the copyright holder and getting specific permission?  We can't see a dance band without hearing covers of popular songs.  Other than Poetry Out Loud, when was the last time you saw anyone perform¹ a contemporary poem they didn't write? 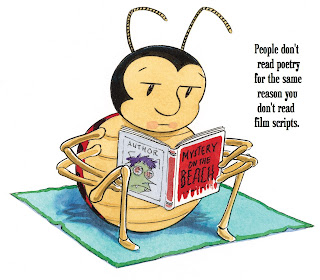 Speaking of "Poetry Out Loud", why is it for kids only?  What message does this send?

Answer:  That adults don't perform poetry.  And, sure enough, they don't!  Not even authors¹!

Now imagine how popular songs or plays would be if they were never performed.

Why would younger siblings appreciate verse more than their older brothers and sisters?  Because Mommy and Daddy read Dr. Seuss to the elder children.  They recited it to the youngest.  Such is the difference performance can make.

Prosody may be humankind's oldest science, predating astronomy and medicine.  Nevertheless, its collected wisdom is rejected by neophytes who then, in a best case scenario, spend years reinventing what they refuse to learn.  Little, if anything, comes of this hubris but, if something did, it would be added to the knowledge base and ignored by the next generation.

Perhaps this is a charming aspect of youth.

It is far less endearing in their educated elders. 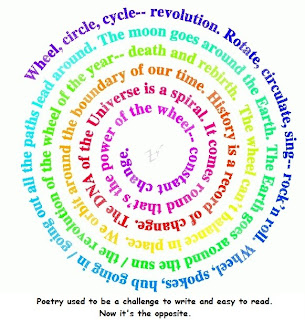 The proliferation of Creative Writing and MFA courses, often at the expense of English ones, is only one explanation for the explosion in production.  There are thousands of vanity--sorry, "showcase"--sites online, including many Facebook groups.  Slam continues to thrive.  Those responsible for this overproduction actually boast about this emphasis on quantity rather than quality.  "There is more poetry being written and published today...blah, blah, blah..."

That little of this is actually poetry by any coherent definition doesn't matter.  The devolution from free verse to prose poetry to lineated prose feeds into this effort as poetry becomes a strictly participation sport.  It's more like yoga than an art form competing for an audience.  Try bringing up this topic in a room where 99% of the occupants are enablers or perpetrators.  At the very least, we are reminded that, while we can't have demand without supply (barring prohibition or people demanding the impossible), we can certainly have supply without demand. 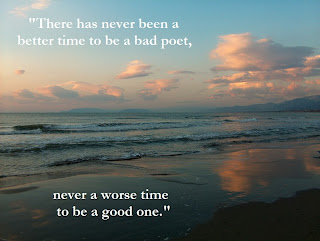 With one wave of my magic wand I just made you Editor-in-Chief of the largest poetry venue in the world.  Your excitement wanes as you read through the brain droppings that people submit, knowing you'll have to select a few dozen of these for your next edition.  This goes on for fifty years.  You begin to wonder if you shouldn't have taken that job at your uncle's mortuary.  More lulz.

Out of the blue, a once-in-a-lifetime brilliancy arrives!

What do you do?  If you stop and think how this will make the rest of your offerings appear you might refuse to publish it.  After all, do you really want to hear your subscribers whine about why all poetry can't be like this?²  Do you treat it like every other poem you publish, none of which have ever been quoted or performed?  That is, do you bury it in the dirt you've had to publish for half a century?  Or do you highlight it?  If so, how?  Do you cancel all other poems and publish that verse, filling in the rest of the edition with discussions of the masterpiece?

If a top periodical cannot promote the best poem of its time what hope is there for lesser works?  Or for poetry's revival? 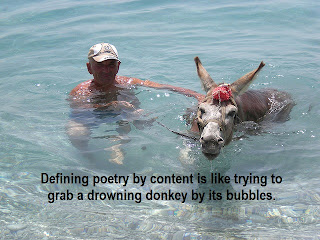 Attend any class.  Read any review or scholarly criticism written in the last few decades.  Spend some time on the blogosphere.  What is the focus of conversation?  Style?  Form?  Rhythm?  Sonics?  Or is it subject matter?  We giggle when non-poets reveal that they prefer verse about bunnies to poems about clouds, yet this is exactly what we find in most literary commentary.  Only the language is different.  Artless lineated prose is praised if it is about philosophy, psychology or literature itself.  The world yawns.  When it dares to demand [gasp!] poetry in its poetry the expressions "unsophisticated" and "anti-intellectual" loom.  If 90+% of the poems written today were sonnets about cats would those who complain be accused of ailoraphobia?

Remember when people used to say that poety is not about what you say but how you say it?  That is sacrilege now.

3. Education and The Inspiration Myth 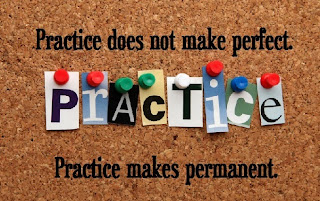 In 2013 the average English or MFA graduate knows less about the elements of poetry than the average grade six graduate in 1913.  We have Creative Writing professors who don't know whether "Prufrock" is free verse or metrical.  We wonder what students are being taught, only to discover that the focus is on content (see above) and inspiration, inverting the truism about 99% perspiration versus 1% inspiration.

Isn't there something perverse about encouraging people to do something they don't know how to do?  Wouldn't it make sense to show them the fundamentals first so that they have a skill to practice? 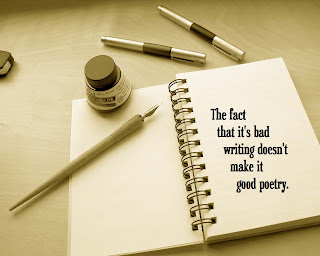 Anything that refers to poetry's failure to find an audience is either ignored or denied, along with the audience itself.  As recently as today, August 26th, 2013, in "The Bibliophilic Blogger",  British poet Nicholas Murray asked "Do People Still Buy Poetry?"  He made some good points (e.g. "we lack proper criticism") but, along the way, he used the failure of an obscure book in 1929--a few years after poetry received its fatal wound from music on the radio--to demonstrate that "there never has been a golden age".  So, there was never a time when poets were rock stars, when poetry outsold prose, when poetry appeared in almost every newspaper and magazine, or when Robert Service made $500,000 from one poem?  That's quite the history rewrite!

Without a hint of irony he concludes:  "If poets themselves don't buy each other in numbers then we are in trouble."  Substitute any other practitioners for "poets" (e.g. novelists, playwrights, magicians, car manufacturers, etc.) and you'll see the problem.  A potential audience consisting of more than 99% of the population is ignored/denied. 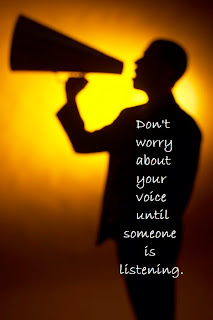 Any one of the above could prevent a resurgence of interest in poetry.  Nevertheless, they all disappear if poetry regains its audience.  Multimedia explodes with productions featuring poetry, as it recently did for rap.  The sheer number of these would make copyright issues moot.  Open mics and slams would need larger venues, if not larger media.  Prosody's case against anti-aesthetics and in favor of education would make itself.  Content Regency shrivels in the face of a multiplicity of poems on the same subject--just pick the best one!  Production and demand would come closer to balancing.  The Watermelon problem disappears on Facebook.  Convenient Poetics withers in the face of what its advocates fear most:  a resurgence of interest in poetry.  People learning iambs from trochees as early as elementary school wouldn't need anyone to tell them what is and what isn't poetry.  Rather, they would tell us.

As it should be.

¹ - It is rare enough to hear someone reading someone else's contempory poem, let alone performing one.

While they wait patiently and clap politely, attendees at most poetry readings look like they're filming an ExLax commercial.  That's on a good day.  On a bad day it looks like someone is re-running the Milner experiment.

² - This may explain why the greatest metrical poem of this century remains unpublished.

Posted by Earl the Squirrel at 7:52 PM