What poetry was, is, and will always be

"The Science of Poetry: A Prehistoric Telephone Game" is one of the more interesting articles I've read in a while.  In it, Rattle Editor-in-Chief Tim Green traces a brief chronology of human and speech development.

His treatise was going swimmingly.  He noted that memorization was a defining function of primitive societies.  He cites only one example, the religious, but he could have added legal, genealogical, and some culture and historical accounts to the lists of verbage that preliterates continue to memorize even today.  His "poetry telephone" analogy was a fine example of what prose, as opposed to poetry, is, although it may not have involved a failure of memory.  With a very limited collective experience (i.e. either Gronk killed and ate the beast--joy!--or the beast killed and at Gronk--tragedy!), storytellers might have been intentionally varying their performances to keep audiences amused.  In other words, "keeping it new" was a challenge primarily for prosers.  Mr. Green mentioned efforts to preserve stories intact through memorization made easy by repetitions.  Had he used the term "verbatim" he'd have rediscovered the definition of poetry.  As it was, he was within a micron of it when he derailed:

"It was poetry that saved the things that mattered, before we had prose."


I suspect he meant "writing";  here is a dictionary definition of prose:

noun
1. the ordinary form of spoken or written language, without metrical structure, as distinguished from poetry or verse. 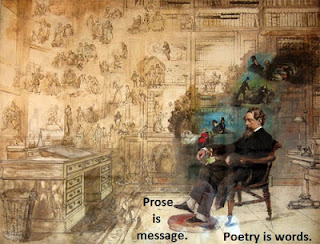 Obviously, poetry grew out of prose, not the other way around.  Our cave-dwelling ancestors weren't like Shakespearean characters, speaking in verse until prose was invented.  Indeed, this was probably true on a piece-by-piece basis as well as the cultural.  Before the development of prosody that Mr. Green mentions, poems would have been presentations so compelling that the tribe chose to preserve them in memory.

The implication that poetry was the only way ancient societies preserved their lore would come as a surprise to any student of, say, Greek or native North American mythologies.  When the storyline or moral was what mattered prose was the preferred medium.  Poetry was employed when the actual words mattered.

Posted by Earl the Squirrel at 3:06 PM