Poetry needs to get lucky.

It is caught in a chicken-and-egg Catch-22: it needs one--not a hundred, not a thousand, but one--breakthrough presentation to convince those who write, those who perform and those who support it to coordinate in creating such a presentation in the first place. Put bluntly, we need a second Shakespeare who, in turn and like the previous one, will require actors and backers.

Sounds simple, no? It might be if it weren't for a fundamental assumption that pervades every phrase of every argument, from the "those-are-our-choices!?" Hill-Duffy and Vendler-Dove controversies to the neverending "accessibility" debate. It is both endemic and pandemic, cancerous and carcinogenic. It is a mindset too universal to merit or require expression. It is the dumbest thing never said by poets. It is not the elephant in the room but the steaming pile behind it. I speak of the self-fulfilling prophecy that poetry cannot appeal to both academia and the public, to balcony and pits.

It is as if the first Shakespeare didn't exist, let alone a second.

The relationships between the three poetry worlds, page, pixel and stage, have ranged from benign neglect to outright hostility.

The print community has largely ignored stage poetry but has been "all over the lot" in its treatment of onliners. Take the two major American organizations, for example. The Academy of American Poets (AAP) is forward-thinking, to the point of sponsoring one of the four major Internet workshops, the "Poets.org Discussion Forums". By contrast, The Poetry Foundation's and "Poetry" magazine's treatment of the pre-existing internet community has been marked by many lows:


That last one is so bizarre that I had to check my facts and wording. How did Internauts react to all of this? By shrugging and walking away from the PoBiz in general and the Foundation in particular. Both subjects have been conspicuously rare in online fora.

This does not bode well for the prospects of any Lilly grant funds going toward popularizing poetry in the near future. As the parable about the miller's son demonstrated, it is facile to criticize an organization that endeavors "to keep free from entangling alliances with any single class or school" in order "to print the best English verse" "regardless of where, by whom, or under what theory of art it is written." The Poetry Foundation, with its size and please-everyone support for everything poets claim as an aesthetic, will undoubtedly be among the last to join any communal effort. An army moves slower than a soldier. 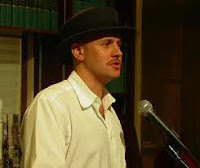 In addition to the AAP there are progressive e-zine editors like John Amen of "The Pedestal" and print editors such as Tim Green of "Rattle" who can lead the way. Indeed, "The Pedestal" has a "Spoken Word/Slam" video section. True, the examples confirm every stereotype we have of performers: in addition to the lack of subtlety and technique in the material there is considerable "who-talks-like-that?" artifice in the delivery. Nevertheless, one community featuring another is a step in the right direction.

There are a few aesthetic issues to settle. YouTube has plenty of classic poems being performed brilliantly. None has caught fire. Similarly, the Poetry Out Loud project serves up examples of good performance but the poem choices are arbitrary and not designed for a wide contemporary audience. Here, the "artifice" is in the language, which might appear dated or overly "poetic" to non-poets today. Whatever video goes viral, it will almost certainly be something timely, in today's language and addressing today's sensibilities.

"Where does money enter the picture?" you ask? Attracting initial attention on YouTube requires paying them in order to feature the video. It may take a few tries before something catches on. Production values and test marketing wouldn't hurt the cause.

Understanding that popular poetry doesn't equate to bad poetry is not the only attitude that will need to change.

Ask yourself this: When was the last time you saw someone, acting on his or her own initiative (as opposed to the NEA's and the Poetry Foundation's laudable Poetry Out Loud initiative), choose and perform a poem by another living poet? It's illegal at slams but why is it so rare at open mics, on YouTube and elsewhere? It doesn't seem likely to me that many authors would refuse permission.

How can poets--not publishers or blurbers but individual poets other than the author--expect the public to take great contemporary poems to heart when they, themselves, do not?

Posted by Earl the Squirrel at 8:11 PM