While he recovers from the excitement of Superbowl XLVI, my brother Earl has asked me to fill in here. An odd request, me not being a poet. I'm not sure what to discuss. 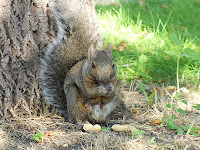 Hey, ever ask yourself why people don't like today's poetry? They still attend Shakespeare's plays. They buzzed about those poems on "Four Weddings and a Funeral". They adore Loreena McKennitt's song versions of "Lady of Shallott" and "The Highwayman". They like the old stuff and they are delighted when it's performed well. Still, I doubt there are many alive who would rather go to a poetry recital than a concert.

Earl used to drag me to readings. My body weight doubled before we discovered the cause: I was so bored by those droners that my metabolism had been permanently lowered.

My brother mentioned in "Poetry in 2032 - Part III: Integration" that poetry needs "one breakthrough performance". He and I have attended exactly that many, and count ourselves fortunate.

Here's the tale: Earl's favorite poet happened to be making a very rare public appearance on Earl's birthday. It was part of a local theatre festival. Earl hadn't heard about this, though, so I had to run out early each morning to hide the newspapers. I also had to gnaw through his monitor cable to prevent him from reading about it online. His friends and our family were in on the secret so no one spilled the beans.

For me, it was a win-win situation. If it was good I'd actually enjoy myself. If awful, it would be a fitting revenge for all the snorefests he'd put me through.

After his birthday dinner of roasted chestnuts, unroasted peanuts and pecan pie for dessert the two of us scampered down to the old theatre house in the center of town. They don't sell tickets to squirrels so we had to squeeze through a hole in the basement. A rafter above the audience served as the best seats in the house.

We hadn't passed the marquee at the front of the theatre. The poet came onstage without introduction and began. Earl had never seen a picture of her so it wasn't until the second piece that he clued in to who it was. Earl gasped when he caught on. Then he started identifying the form and meter for me as he recognized them. (That's Earl for you.)

I have never seen the likes of this effort, before or since. It was a series of stories, many of them outrageously funny. Not that droll "aren't-I-clever?" humor you normally get at readings where the poet actually looks up to see if everyone got it. I mean pissed pants funny. The transitions between introduction and verse were so seamless and the language was so natural that if you didn't have a good ear for meter the entire performance would seem like one fascinating conversation.

The finale ripped the breath out of our lungs. Lighting was reduced to what came from projections on the walls: pictures like the one seen here. This sonnet was the story of Phan Thi Kim Phúc, the child burned during the napalm bombing of her village, Trang Bang. At one point the poet ran in short, hopping steps down the aisle, screaming "Nóng quá, nóng quá - too hot, too hot" and begging for help. Everyone was immobile. They weren't in their seats. They were in Trang Bang and the sky was on fire.

I won't forget that final couplet:

"A ghostly soldier looked at me and then
away. He crossed himself and fired again."

The poet continued on out the front entrance and was gone. No encore, no bouquet, no farewell bow.

"This," Earl pronounced, "was the greatest birthday gift ever. Better than any concert."

I should have stopped there but who can resist pushing Earl's buttons? Certainly not his sister.

"What about the bait-and-switch, though?" I asked. "Bringing 'em in with the promise of theatre--in a festival, no less--and then ambushing 'em with poetry?"

After what we'd just witnessed, that night would have been a poor time to argue with Earl's riposte:

"Pearl," he intoned, "poetry is theatre."