Everything you need to know about poetry

I contend that everything one needs to know about poetry can be discerned directly or indirectly from these two scenarios, both of which must have played out in every nascent civilization:

The alpha tribesperson gets up in front of the group and delivers what appears to be a significant, inspired message. Unfortunately, language hasn't been developed yet so the audience can only nod obsequiously, careful not to offend their leader. Everyone tries to avoid these encounters, their motivation being intimidation, boredom or the lingering suspicion that the speaker is full of shit.

Soon after establishing a common language the primordials gather around the campfire. Experience being limited, there is a paucity of material, such that separate members end up telling the same story. Plotlines that survive long enough become part of that group's culture, history, religion and lore. The entertainment comes in the different ways these speakers relate the same events. This is the basis of prose. Occasionally, a performer "nails it" so perfectly that the audience decides to preserve that rendition intact by memorizing it. That is the basis of poetry. This is history reminding us what happens when we lose our audience. It doesn't really matter what the cause: babble instead of communication, competition, boredom, lack of tools, venues or media, et cetera. When audiences exhibit the "good night" response, fleeing if they can, sleeping if they must, a predictable set of interdependent circumstances unfolds:


Does any of this sound familiar to you? 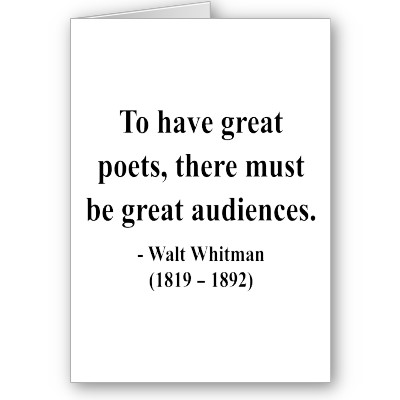 While Scene #1 may be of greater interest to those invested in the post-WWI poetry world, it is Scene #2 that strikes at the definition of poetry as memorable speech, not necessarily rhythmic speech.