As poets or as bird-dogs, then, the Content Regent can't produce good poetry while the TechFreak can't produce interesting poetry.

Let us redivide the poetry pie along other, more basic biases: good versus bad and commercial versus aesthetic. Were we talking about the best contempory versers we could be comparing the ever-popular Leonard Cohen with the esteemed academic Seamus Heaney. In a recent Guardian article entitled
"What's wrong with popularising poetry? Well, the poets don't seem to like it . . ." we saw two promoters of bad poetry squaring off. 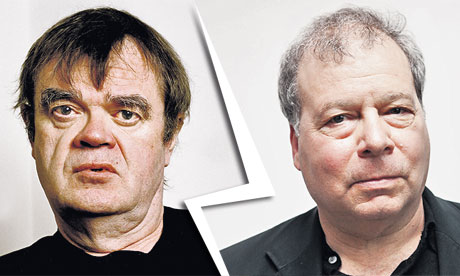 Leaving aside the fact that they look like two psych patients on bath night, we see an Edgar Guest being attacked by a typical Content King. The distinction between them is less than meets the eye: someone with poor taste versus someone with no taste.

What galls Content Regents is the fact that bad poetry trumps non-poetry.


Want to be Earl Gray for a Day? Email your tongue-in-cheek rant to earlthesquirrelpoetry@gmail.com . Feel free to use simple HTML tags as necessary.