Even when English language poetry was alive it benefited from context.  Shakespeare used plays not to change the English language, which he certainly accomplished, but to attract and entertain an audience.  Contemporary dramatic poetry isn't "a thing" but there are other ways one can find listeners.  In order of current and potential success these would include:

If you have social media accounts, ask yourself:  "How often have I Shared [on Facebook] or Retweeted [on Twitter] a stranger's contemporary poem with my [non-poet] friends?"  Other than songs and jokes, that is.

We asked readers in four different active forums--novice, expert, blog, and social media--to imagine a serious poem (not song) that they might pass on to friends.  No response.  Not only could people not write an interesting poem, they couldn't even imagine one.  This is to say that not only is English language poetry dead, but we can't envision it being alive.  (N.B.:  In non-anglophone demographics people cannot fathom a society where poetry is dead, a country where few can recite a stanza written this century.)

Just as it is failed artisans who blame their tools, only failed poets will blame their audience.  It is especially absurd when that audience doesn't exist.  If poetry is to revive, there needs to be well crafted verses of interest.  More than that, though, it needs to overcome the negative stereotype of what Leonard Cohen called "other forms of poetry advertised as poetry":  artless ranters, corazoners, linebreakers, cryptocrappers, et cetera.

In the coming days we hope to address ways to use context to attract--or at least to not alienate--an audience. 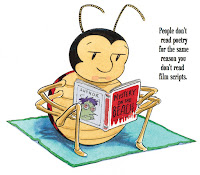 Poetry is a mode of speech, predating the advent of writing by millennia.  People read poems with a view toward quoting, if not performing, them--in their imaginations, at the very least.  Listening and reading were a chicken-and-egg scenario, but in this case hearing came first, anthropologically at the macrocosmic level and chronologically in microcosm.  Reading a poem allowed us to, among other things, examine why it worked so well when we heard it.

Put simply, if there is no audience, how can their be a readership?  Why would anyone want to study failure?
Posted by Earl the Squirrel at 10:55 AM