From the Urban Dictionary:

Substition = "The opposite of a superstition, a substition is the belief in something that is utterly true."

Every creative person I know has been accused of abandoning projects.  The rest of the world regards them as quitters.  Is this anecdotal?  Stereotypical?  Prejudicial?

Inventors and writers give up on ideas simply because they have so many of them.  People who accomplish every goal likely don't conceive many.  It's not just that they don't set many;  the ones they do concentrate on and bring to fruition were either someone else's idea or among few inspirations they've had.  They can be like a sterile couple bragging that they've never put a baby up for adoption.

Some might marvel at a planet that has the precise circumstances we need for survival:  oxygen (including water), air pressure, ray filtering, temperature, gravity, meteor protection, etc.  We might ascribe our existence to coincidence or any number of superstitious causes.  The simple fact is that without these cosmic conditions in place we'd never be here to observe them.  Each of these, and every other known variation of them, is a conditio sine qua non.  Once all of them are in place, creation is inevitable.  Once all of these ducks are in a row the presence of life isn't a miracle;  the conspicuous absence of it could be, though.

Superstition involves forsaking the search long before its destination.  People speak of "the god of the gaps", where any unexplainable noumena or phenomena becomes a theological question.  With time, this abdication of reason occurs earlier and earlier in the process.   Societies end up spending more time rationalizing the explication than looking at the problem.  St. Augustine's comment "I no longer dream of the stars" may have set human science back fifteen centuries.  Similar Luddism struck other burgeoning civilizations.  People prefer immediate answers to verifiable ones.

Substition is the opposite.  It is not necessarily a commitment to the scientific method;  it may simply be I'm-from-Missouri pragmatism and a practical, empirical insistence on pursuing what works.  It is the disappearing ability to watch 50 years of abject failure and infer that maybe--just maybe--we ain't doin' this right.  Substition is the realization that, like everything else, poetry is a knowledge that requires learning and a skill that requires practice.  As blindingly obvious as this sounds, it directly contradicts the prevailing "wisdom" and is an excellent way to lose friends within the "poetry community" itself. 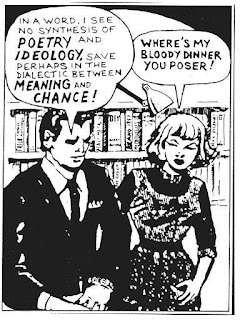 Currently, almost all of our resources are tied up in creating more writers in the superstitious belief that art is a miracle produced randomly by ten million primates over 100 years.  Lazy pseudo-intellectuals and teen angsters of all ages, each suffering from delusions of interest, dominate the stages and pages.  Not least among the drawbacks to his approach is the fact that we were hoping for a poem or two in our lifetimes.  Flukes do happen but, even at poetry's height, they don't stand the test of time.  Also, by completely ignoring the audience (tina) such that nobody reads poetry, there won't be anyone to recognize any masterpiece if and when it emerges.

It seems we're confused the unavoidability of failure with the inevitability of success.

It's like the parable of the seeds on rocky soil.  After a while, we aren't really planting crops;  we're feeding birds.  It's not like we prepared the ground.  It's not like we taught our children the definition of poetry, the difference between iambs and trochees, the rudiments of performing or even the fact that its all about audiences, not writers or readers.

Posted by Earl the Squirrel at 7:05 PM