Tim Green of Rattle magazine critiques submissions from his subscribers as part of a popular feature.  This is helpful to potential contributors since it shows precisely defines the editor's aesthetics and prosodic interest (if any).  This, the first in a series, examines "Portrait of the Second Wife as Understudy" from Rattle #47, Spring 2015, written by Amber Rambharose.  Please take a moment to read it now.

What we have here is an excellent story with a fine, crisp ending.

Is it a poem, though?

You tell me.  As you read it can you imagine yourself "owning" it?  Memorizing, performing or quoting it, as you might "High Flight" or a passage from "Hamlet"?  Can you imagine anyone else wanting to?  More to the point, is it written in a manner that would facilitate this?  How does it compare to others of its ilk?  As an attempt at a climactic poem, it aims to start slowly and gain in momentum, pace, intensity, sound and rhythm as it goes along.  How does it compare to the modern archetype, "Studying Savonarola" by Margaret A. Griffiths?  What is missing?  What could be trimmed?

Every poet we know keeps a notebook or file containing random thoughts gathered over the course of time.  For "avante garde" types the next step is to assign a meaningless fake generic (e.g. "conceptualization", "ideational", etc.) name to the inchoate scratches and find someone naive enough to publish them.  (The latter task is alarmingly easy these days.)  By contrast, an experienced poet will often record these musings in rhythmic strings.  This is a function of habit, permeating everything the educated verser writes.  We'd wager that there are fewer rhythms and sound repetitions in most "poems" today than in Derek Walcott's shopping lists.  Or this blog, for that matter.  Such raw material is often overwrought, as these throwaway lines attest:

...retrace the echo of your fingers.  Let us be
a bright mandala in the waves.

...as hunger is the opposite of death.

...as if you print your words on apple blossoms.

The second stage is to cull many of these lines thematically into one piece, and then into individual paragraphs or strophes to form an outline.  Then the work of adding the actual poetry begins, culminating in a first draft.  After considerable fine tuning we have something worth showing an editor.

"Portrait of the Second Wife as Understudy" is a draft, one that exhibits two serious problems and two blinding flashes of genius. 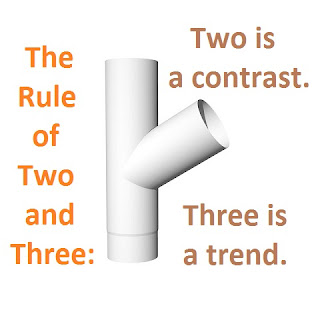 The first is a boast by NFL Wide Receivers to CornerBacks trying to cover them.  It means that, while the CB thinks he has the WR in check, the fact is that the latter is about to use his superior speed to get clear and catch a pass.  It is a contrast between belief and reality.

The Latin phrase, on the other hand, is a process:  three things Julius Caesar did in the order that he did them.

When repetitions are not for dramatic effect, as in "Oh, please. Please," they follow this same Rule of 2 and 3.  If the same word recurs in pairs, like "I sighed my sigh" and "believes what it wants to believe", the mind expects a comparison, especially given that poetry is an acerbic form and "I sighed" or "believes what it wants to" (especially after "believable" much earlier) would have sufficed.

This applies to repetitions of phonemes, too.  Throughout the poem Ms. Rambharose uses proximate, conspicuous assonance and alliteration isolated in pairs far more often then in triplets (e.g. "for months, fine-tuning the flutter") or multitudes¹.

the way the script dictated. I threw my pupils
up as wide as windows. The orchestra swelled

The long "u" sounds in "threw" and "pupils" stand out as the only occurences in the strophe.  By contrast, the "w" from "wide as windows" is nicely presaged in "way" and later confirmed in "swell".  The rest of the poem exhibits far more pop-up pairs ("tell by scent", "sock slide down around", "her heart") than integrated iterations.  All of this said, it is far more encouraging to see slightly off-kilter sonics than the typical prose with linebreaks.

When poems have two major deficiencies the first is usually sonics and the second is rhythms.  Not so here.  This piece has long strings of binaries, starting with the iambic first sentence and ending (with little tweaking) at the appropriately imperative trochaic coda:

Tell the stage director to place a pair
of Prada espadrilles [beside] the front door.
Size eight. Dark blue. Exactly²
where she left them.

The trinaries need considerable work, as do the transitions, but these touches of mastery can wait.  For now, the piece's obesity requires attention.  It's more than removing the rhythm-killing pronoun, "my", in line 2.  Redundancies range from (S3-L4) "brought to me" to (S2-L4) "at precisely the right moment" (do orchestras normally swell at the wrong moment?).  There is a flabbiness in the manipulative first and third entreaties here:

Tell me I am better
than she was. Tell me my breasts are higher.
Tell me I am everything
you ever wanted.

These would benefit from being more concrete and, perhaps, sensual.  Think Michael Ondaatje's "Cinnamon Peeler" here.

Strategic decisions need to be made in order to pare this down to size.  As it is, I'm guessing that many who started this offering didn't read the whole thing.  (Did you?)

Amber Rambharose is something rare among poets, young or old:  she gives a damn about her audience, not just her readers.  She studies the craft and will be worth watching sooner rather than later.

...culminating in all three together for the third time in this single phrase:

This comes right after the word "changed", no less!

² - Ignore the faintly enunciated "E" in "Exactly".  Treat it as anacrusis.

Posted by Earl the Squirrel at 4:39 PM