Should you learn only one thing here let it be Shakespeare's Law:  "If you don't know how poetry is performed you don't know how it is written."  Those who deal exclusively with poetry in print are missing entire dimensions of the art form:  intonation, tone, pace, etc.

Suppose you want to improve dramatically as a poet, scholar, critic or editor.  The easiest way to do so is to do the opposite of what you're doing now--if only for a different, wider perspective.  The reasons for performing poetry are as numerous and vital as those for reading poetry.  Next to "Shakespeare's Law", the most important lesson is that friends, relatives, sycophants and, yes, applauding audiences lie to spare our feelings.  The only way to know if we are being ignored or enjoyed is to look the bastards in the eye while performing.

Seek out a diverse group.  We learn from the good and bad what works and what doesn't.  This isn't a classroom.  We likely won't have a mentor, per se.  What conclusions we gather come from the expressions and body language of our audience members.  If and when we do capture their rapt attention it's a rush, like multiple orgasms on Ecstasy after winning the lottery.  It's like the Nexus on Star Trek.  Describing it as "addicting" is like calling WWII "a disturbance".

Newcomers to poetry performance ask the same three questions.  In fact, wondering about these is what delineates serious prospects from The Unteachables².

1.  How long will it take me to become a comfortable, competent presenter without formal training?

By "comfortable" we mean able to perform in front of strangers.  It's easy to say "Don't be shy!" but the fact is that many will find this intimidating.  Just bear in mind that, while onstage, you're a persona, not a person, and that many fine actors and actresses are extremely shy in real life.  Indeed, your shyness may work in your favor if it brings the ability to read reactions better than extroverts who come right out and ask for people's opinions.

Don't worry about making a fool of yourself.  That is inevitable.  A rite of passage.  Every veteran can tell you horror stories³ of their own experiences.  You ask each of them why they continued and you get the same response:  "I don't know, but I'm glad I did."

By "competent" we mean using the natural speech of a character who is, apparently, making it up on the fly, as opposed to reading, reciting or--heaven forfend!--"poet speaking" prepared text.  Needless to say, performance involves memorizing your work.  As for printed copies, you might keep one in your pocket or, better yet, in the hands of an offstage prompting aide.

Those who learn to speak normally into a microphone usually do so within a year.  No more unmodulated droning or screaming!

2.  How long before audiences find my material interesting?

Many new authors have one good story in them--the one that inspired them to become writers, perhaps--but soon fail to produce compelling follow-up material.  When do new poets learn that journal entries and lectures lose audiences?  When do they rise above the first person singular?  When do they discover humor, tragedy, drama and subtlety?

For many poets, the answer is "never".  Those who do outgrow rants and navel-gazing tend to do so in their third year of performing.  IMHO, this lesson alone is worth the effort.

3.  How long before my work is considered poetry?

While the success rate of Print Worlders isn't significantly better, none of the verse I've seen onstage warrants scrutiny on the page.  Indeed, the ultimate compliment a listener can pay is to request the text of a poem you just performed.  This I have encountered only once (yet more proof that Nobody Reads Poetry).  That was for a copy of "Studying Savonarola".  Speaking of which, here we have a case of a question precluding answers.  For example, someone asking "Who is the greatest Wide Receiver in NFL history?" isn't posing a query;  they are merely stating a complete lack of interest in football.  There would be no point in trying to explain Jerry Rice to them.  Similarly, critics who complain about the slow, unimaginative beginning to Maz's signature masterpiece are just admitting that they've never been onstage without a script;  the concept of performance value would be as foreign to them as Romulan grammar.  This gap in knowledge and perception is enough to explain anyone's failure as a poet.

Disregard for the elements of the craft is difficult enough to understand in academia.  Maybe they don't want to raise the bar higher than they can jump.  What is even more astounding is that slammers fly across the country to lose in the National Finals because they couldn't be bothered to read a few articles on technique--something they could do on the plane--that would tilt the balance in their favor.

Are we so lazy, anti-science and anti-intellectual that we think educating ourselves is an unfair advantage?

¹ - "I should rather be skinned alive than exploit my feelings in writing. I refuse to consider Art a drain-pipe for passion, a kind of chamberpot, a slightly more elegant substitute for gossip. No, no! Genuine poetry is not the scum of the heart."

Barring diminished faculties, there are two types who cannot be taught, largely because they are oblivious to physical clues that they are boring us:

Activists with less commitment to art than to changing the world with their next sermon to the choir won't be interested in learning.  Or leaving.

Narcissists wedded to the notion that all of their random neuron sparks hold cosmic significance will have little interest in filtering them with intelligibility, let alone sense.

In addition, there are two types who will not be taught:

Those who regard poetry as catharsis¹ will flounce out of a slam, muttering something along the lines of:

"How dare you judge my feelings?!"

Few will return until and unless their view matures.

Recently, on a high profile blog, a well-known university professor learned some key aspects of prosody that changed her perspective forever.  Unfortunately, it also changed her employment status, along with the venue's approach to open commentary.  The lesson could not be more clear:  educators educating themselves in public does not enhance their academic portfolios.  Not surprisingly, academia's view of slam and open mic events is jaundiced.  The deleterious effect of this prejudice is evident in every line of poetry presented by institutional publications.

I realize this advice will find little fertile ground but if you have any interest in poetry grab a disguise, think up a clever pseudonym, and get your ass down to the nearest slam post-haste.  Trust me. 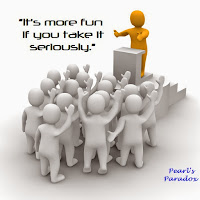 ³ - Before heading out to my first open mic my mentor reminded me to breathe.  I thought it was odd advice--I have an autonomic nervous system for that, you know--until, you guessed it, I ended up pulling a Clinton, failing to inhale.  Think of a boated trout here.

Things were worse on my third outing.  I blanked.  After the most awkward 15 seconds of my life I cheated, reaching into my back pocket to retrieve a hard copy.  I read the next section, shook my head and said:  "I can't believe I wrote such crap.  No wonder I forgot it."  The crowd laughed, I skipped that section and lived to chuckle about it later.

Posted by Earl the Squirrel at 8:26 AM