"There's no one left to torture."

- "The Future" by Leonard Cohen (apparently not referring to poetry's "market")


With what objective quantification can you measure an art with no market?  How can you evaluate a product with no consumers?  That is, how do you measure the success of failure?

The Internet in general and the social media in particular have given us an answer that predates currency itself:  audience.  Our challenge isn't to sell poetry but to give it away.  Sounds easy, but it isn't.  Post your favorite poem on Facebook and see how few people "Like"--let alone "Share"--it.  See how few poems have gone viral, as Jonathan Reed's reverser has:


Don't laugh.  With 16,663,051 viewers and 10,786 comments at the time of this writing, "Lost Generation" is easily the best known poem of this century...and, despite its triteness, one of the cleverest.  As for technique, it demonstrates the only characteristics that matter in poetry:  it is memorable and cannot be paraphrased.  It is verbatim.  To put its success in perspective, during the last six years (i.e. since it was posted online) "Lost Generation" has been seen by more people than all print poems combined.

Think about that for a moment.

Poetry began with raconteurs telling stories in front of their tribespeople, whose eyes followed the performers or some indicated object or cave painting.  Emerging from a dark age when verse relied on text and the dreaded poetry reading, we come full circle with video.  Just as .MP3 files on IPods revolutionized the music industry, obsoleting albums, CDs and DVDs, .MP4 (along with .avi .rm, .flv and other [multimedia container] formats) files allow poetry to operate on a global scale with the same audiovisual appeal that it had at its height.  As an example¹, consider Shakespearean actors or imagine a non-slam version of Steve Currie's "Worst Date" with more natural language and pace:

As daylight died on the primordials, visual contact was lost whenever the speaker stepped away from the fire.  Voices became disembodied, emerging from the darkness.  This would have been the precursor of the sound file.

Millennia later, many societies gained literacy, which was useful for archiving verse and disseminating it to those performing or studying it after having seen or heard it performed.  Think of Shakespeare's folios or lyrics that came with music albums as examples.

Obviously, audiovisual is poetry's primary medium in both heirarchy and chronology.  By watching his plays being performed, seeing the actors point to their heads while saying "coxcomb", a student of Shakespeare will find it much easier to understand the language.  Studying the text can come later.

The audio or visual are secondary media.  The former might involve MP3 sound files;  the latter, sign language (minus alphabetics).  A deaf person might be impressed by a soundless video of someone's expressions as they sign a brilliant poem;  might the text be worth examining?

Print is the tertiary medium.  Because it lacks facial expression, gesture, body position and movement, tone, pace, modulation, emphasis, and inflection, text was never meant to compete with or replace performance.

So, the future of poetry is in performances, right?  Slam, minus the histrionics?
Not so fast!  Remember us mentioning "some indicated object or cave painting" above?

Montage with voiceover and music:


The Evolution of Buffalo Wings posted by Earl Gray on Vimeo.


Slide Show photos with text (aka a "Facebook poem"): 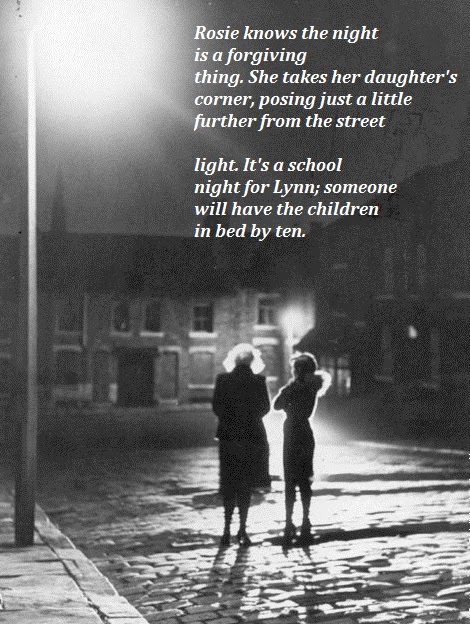 Okay, so we know the modes and media in which successful poems will come.  What will those verses be about, though?

Next:  The Future Passed

¹ - Notice that all of the examples in this post require your imagination;  they need more interesting writing or material, modernization of language and/or better acting or production before they could work for a contemporary audience.  Hey, if we had better examples to show you this post would be entitled "The Present", not "The Future".