In a thread on Eratosphere regarding the Boston Review's 20 Top Poems of 2013 it took all of three sentences and a URL before the topic was switched from poems to poets:

By "Top Poems" the article means the most read;  they are not making an aesthetic judgement.  Perish the thought!  They didn't include hit counts but the paucity of responses is telling.  A few over-the-top cheerleaders breathlessly blurbed the first few, after which the poems were politely ignored.  In essence, "Top Poems" was determined by whichever poet was able to guilt the greatest number of friends and family into viewing the fare.

Beyond that?  Even the NSA won't read this stuff.

Regarded objectively, the poems exhibit little or no technique, are not in crowd-pleasing genres (e.g. romance, humor, drama), and are almost all the same form (i.e. text, since it is too dull to publish as prose [with or without linebreaks]). 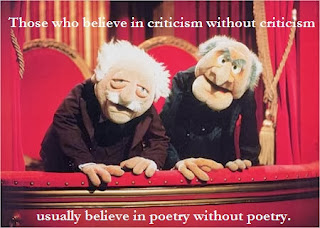 How would such typewriting fare in a critical environment?  Here are some sample reactions from Eratosphereans:

"...I just don't think this Boston Review material is even defensible for the most part."

"I've seen Anne Carson's work elsewhere and have a vague recognition that most of it is not as laughable as her entry here."

Were this posted to such a forum, these might be among the more charitable critiques.  Eventually, a sympathetic senior member or moderator would suggest that, because the posters are beyond their depth, moving to a less critical/expert venue might be in order.

Let us not make light of the authors' accomplishment.  It is difficult for any verser to randomize sounds and stresses to this extent, even when creating prose.  We are reminded of Peter John Ross attempting to write as badly as Billy Collins, only to give up after 20 minutes, having produced a villanelle that was decidedly better than anything BC has ever authored.  To this day PJR ranks this among his greatest artistic failures.

Submission guidelines perpetuate a uniformity of text, mostly self-amusing musing ("SAM").  There is a tremendous practicality and convenience in establishing this as an industry standard at both the microcosmic (i.e. all poems in all issues from the same publication) and macrocosmic (i.e. across all publications) levels.  The editors are happy because they don't have to get involved in aesthetic arguments and can hope to benefit from the gratitude of the nation's professors.  The job-seeking authors are happy because, with little talent or effort, they get a publication credit for their resumé.  Readers?  What readers?  If anything, a following might actually hurt a teacher's chances of being hired.  In today's topsy-turvy ethos, it is deemed admirable to pander to editors and poets but not audiences. 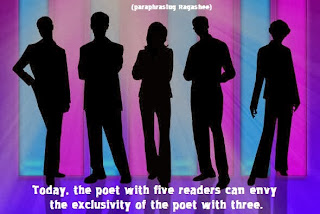 Certainly, no one will be accused of editorial inconsistency.  If nothing else, this conformity is a simple and elegant solution to the Watermelon problem:  publish only what is plentiful.  It explains why, of the five best poems of this century, only three have been published (one of them posthumously), none by a major print magazine.  Notice how these publications feature poets but rarely poems.  Taken together, this is a subculture that values poets, not poems.

So why is it "backwards" to accept this reality and follow along?

Because, as the site preamble says, our concern here is poetry that people would want to encounter.