...for all the reasons you don't want to.

That's a given.  Otherwise, the mere existence of an audience would pull you in like a bee to pistils, a bridger to Stayman or Bill to Flowers.

For us squirrels, timidity is survival, like your fear of snakes, spiders, heights or tax audits.  The same reserve is not so healthy with humans in general, poets especially.  A shy verser is like an acrophobic paratrooper. 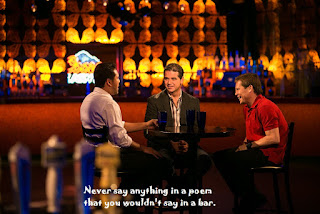 As an introvert, your perfect test audience would be a group of deaf and blind people turned in your direction.  Well, that pretty much describes the average slam or open mic audience.  These people are so self-absorbed, even when not waiting for their three minutes of fame, that you could probably strip naked and without any of them noticing.  (This may explain why nudity is among the few things expressly forbidden at slams.)

As a newcomer, regardless of how well or badly your performance goes, 30 seconds after you finish no one present will be able to pick you out of a lineup.

This is a gross misapprehension based on a ridiculous stereotype.  Open mic and slam afficionados are not "slightly creepy/crazy".

They are completely so.  Lest you doubt me, try showing up five minutes before starting time.  Watch the performers robotting about, making spastic movements and gestures while grunting and whispering to themselves.  They are either poets practicing their presentations or zombies, and the smart money isn't on "poets practicing".

Do not worry about your safety, though.  Such events are like boarding the Borg cube;  if you aren't seen as a threat you aren't seen at all.  That said, stick close to the organizers and MC, just to be sure.  (Why staff members aren't forced to wear white coats is anybody's guess.)

"But my interest is in teaching, not writing or performing, poetry."

Of the the myriad reasons to practice performance, none trumps the fact that you will be quoting poetry to students on a regular basis.  To put this in perspective, only the need for teachers to perform poetry exceeds the need for students to read it.  That may seem like hyperbole to anyone unfamiliar with Literature or Creative Writing course dropout rates.

"But these performers are so much better than I!"

Hell, no, they ain't.  You must participate in order to appreciate the fact that, sight unseen, when you take that stage for the first time you'll be among the three best presenters present.  Don't believe me?  This guy is a world champion slammer:

Did he go to the same acting school as William Shatner?*

"If these performers are so bad what am I going to learn from them?"

Nothing.  If you're extremely fortunate you'll find someone who isn't trying to cram as much angst into 180 seconds as possible.  You will find a friendly (or, at least, totally indifferent) audience, though.  This will help you overcome your fear of public speaking.  You'll discover why reading poetry aloud works only on kindergarteners.  You'll learn to perform from memory so that you can look the mealy-mouthed bastards in the eye to know how well you're really doing.  None of this can be convincingly imparted by a squirrel on a blog;  it can only be learned through experience.

"But slam is a competition!" 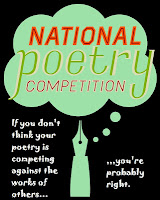 And getting published in a high end literary magazine isn't?

Ignore the competitive aspect of slams.  The judging is insane.  As recently as this week I saw a competitor blow the audience, including the judges, away, only to earn 7s and 8s.  The next poet put everyone to sleep.  The judges shook off the effects of their slumber, looked at who was climbing off the stage, and flashed 9s and 10s.

There is a competition going on here but it is far more subtle than the one involving drunken judges raising cards with numbers on them.

"But I don't write for an audience."

Then isn't it time you started?

"But I write for myself."

They why show it to anyone?

"Sorry, I meant to say that I write for poetry readers."

Let's take a best case scenario:  A fair-sized publisher puts out your poetry collection.  You'll be asked to do book signings and readings.  Why readings?  Because even publishers understand that poetry is not primarily a textual or an audio art form.  Like standup, television and movies, it is an audiovisual one.

Let's say there are so many attendees that the event can't be held in a phone booth.  (I'm sorry.  Phone booths were tiny alcoves built to accomodate obsolete land line telephones.)  Knowing that viewers may own videophones and that poetry readings cause narcolepsy, don't you think the time you spent overcoming your shyness and developing performance skills might come in handy now?  Whose video will make a bigger and better impression online?  Your scintillating display or readings that cause stocks in Ambien to tumble?

"Won't this change the way I regard and write poetry?"

Only if you're lucky.

Are you kidding me?

You will loathe every second of it.  After the first one you'll resolve to never return.  You will wonder why you ever listened to some silly squirrel on the Internet.  You'll stay away for months.  Maybe years.

Then, an eerie, perverse, Capistranic homing instinct will kick in, inexorably drawing you back.  Soon you will be making friends and looking forward to the next get-together.  Nevertheless, you will remain an outsider until that one, transformative moment when a few listeners, their eyes gleaming with fascination, lean forward and smile.  If only for a instant, you will own them.

*  William Shatner in an acting class?  What was I thinking!?

Posted by Earl the Squirrel at 5:44 PM