"...there must be great audiences."
- Walt Whitman

Prose poetry is not some mongrelization of prose and poetry. Like a blind person relying on other "heightened" senses, the lack of meter or rhythm explains why prose poems are so replete with other poetic elements. Just as the stich and rhythm string define verse and free verse, respectively, prose poetry is distinguished by density. This is expressed at the verbal level as concision and, if a longer poem, at the technical level through mnemonics. Allow me to demonstrate:

In three words the poet has captured the devastation and one of its tragic ironies. Short pieces like this derive their power and memorability from their depth and size. In addition to concision, longer poems will need to use a density of technique. The standard prose poem example is Louis Simpson's translated of Charles Baudelaire's "Be Drunk":

You have to be always drunk. That's all there is to it—it's the only way. So as not to feel the horrible burden of time that breaks your back and bends you to the earth, you have to be continually drunk.

But on what? Wine, poetry or virtue, as you wish. But be drunk.

While the repetitions of words survive translation, I'd like to see more sonic reiterations (e.g. consonance, assonance, alliteration) than this. Prose poetry should be stuffed with a broader range of technique. More fundamentally, "Be Drunk" lacks Whitman's requirement: an audience.

To survive, any platform needs a "killer application". Those who insist that poetry has to have rhythm may be surprised to learn that the best and best known poem of the last 400 years was neither metrical nor free verse. Like the latter, the prose poem that I have in mind does use rhythm--prominently so in places--but breaks that cadence with deliberate effect.

I speak of a poem recognized by every anglophone on the planet. Its author produced and performed a number of such compositions, many under very similar circumstances, but this is the one we remember. In terms of device density, it exhibits more poetry techniques per sentence than anything Shakespeare ever wrote. (No, that's not hyperbole. Count 'em.) Its poetic, logical, grammatical and rhetorical constructs are used as examples in almost every technical manual and aesthetic dictionary written in the last century. By any rational, objective measure it is the greatest poem written in the last four hundred years. Contemporary descriptions of it included the phrase "speech for the ages". In my view, that is as accurate a definition of great poety as we'll find. 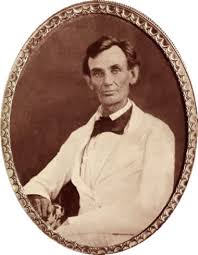 Four score and seven years ago our fathers brought forth on this continent, a new nation, conceived in Liberty, and dedicated to the proposition that all men are created equal.

Now we are engaged in a great civil war, testing whether that nation, or any nation so conceived and so dedicated, can long endure. We are met on a great battle-field of that war. We have come to dedicate a portion of that field, as a final resting place for those who here gave their lives that that nation might live. It is altogether fitting and proper that we should do this.

But, in a larger sense, we can not dedicate -- we can not consecrate -- we can not hallow -- this ground. The brave men, living and dead, who struggled here, have consecrated it, far above our poor power to add or detract. The world will little note, nor long remember what we say here, but it can never forget what they did here. It is for us the living, rather, to be dedicated here to the unfinished work which they who fought here have thus far so nobly advanced. It is rather for us to be here dedicated to the great task remaining before us -- that from these honored dead we take increased devotion to that cause for which they gave the last full measure of devotion -- that we here highly resolve that these dead shall not have died in vain -- that this nation, under God, shall have a new birth of freedom -- and that government of the people, by the people, for the people, shall not perish from the earth.

Posted by Earl the Squirrel at 1:12 PM