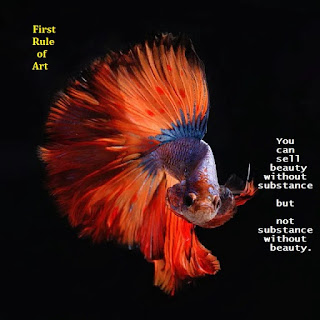 If you've ever turned on a television or radio you will know that beauty sells, regardless of whether it has significant content or not.  If you add up the successes of prose with linebreaks--all none of them--you will see that even the most profound thought disguised as poetry fools no one.  One might think this would be self-evident:  those bright enough to appreciate the subtleties of meaning would certainly be clever enough to know that these can be obtained elsewhere with infinitely more artistry.  Thus, there is no audience (not only due to the lack of rhythm or sonic appeal) and readership is limited to those trying to sell, not necessarily buy, musings of similar "quality".

Even with $253,000,000+ behind them, the Poetry Foundation, established in 2003, hasn't produced a single poem that you, I, or others have found memorable--certainly not one with any performance appeal.  You can't buy readers, let alone listeners.  How many times have you seen anyone quote from a poem in Poetry Magazine this century?

There is a Goth aspect to postmodernism.  It isn't merely devoid of aesthetic merit, as one expects from anyone too lazy to study prosody.  It is Convenient Poetics on steroids.  Incapable of beauty, the purveyors of cryptocrap become imbued with a puritanical fervor against it.

It is as if envy became a virtue, failure a sacrament.