Love is a Weakness - Chapter I - Meetings

Even though most of us were alive at the time, few can believe what life was like in the decades before Kemla stepped onto that stage.  Who can accept that in the first two decades of the 21st century fewer than 2% of anglophones could recite a single line of contemporary poetry, or that most new "poetry" books didn't include a single verse?  Who can accept that the average English graduate didn't understand how meter worked?  Who can accept that poetry magazines never discussed technique?  Who can accept that for more than a century it was illegal to perform poetry without the author's explicit consent?  Or that poetry didn't produce a single successful writer or performer for more than a generation?  Who could expect those defending the abandonment of centuries of experience and science to be taken seriously after decades of total failure?

Who could imagine poetry dead?

Such was the status quo as Kemla finished reading that first stanza.  It would remain so for sixteen more seconds.


Grasshopper from Earl Gray on Vimeo.


We have the exact timeline from the four cameras trained on the stage.  The Closed Circuit Television one saw the action from behind the podium, looking out into the audience.  It allowed us to count and identify the 43 people present.  Maude's event camera recorded all the performances head-on from across the room.  (With the artist's consent, these videos would be posted online.)  Auden's auction camera caught Kemla from the left at a seventy one degree angle.

At the two second mark Rick entered the room from the kitchen and saw Auden filming the performance.  Thinking this unusual, the waiter turned on his cellphone and waited for it to power up.  Standing at 23 degrees to the speaker's left, Rick took a few still photos before switching over to video.

At the four second mark Kemla, still looking down, folded the placemat containing the poem she was reading and set it aside.  (A month later this scrap paper would be auctioned off online for $155,000.  It was resold the next day for twice that.) 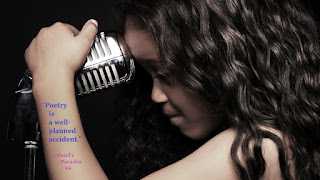 At the seven second mark, still without looking up, Kemla switched off the microphone.  The click resounded about the room.  Later, the world.

At the eleven second mark Rick's phone-cam became fully operational.  He pointed it onstage just in time to snap the most famous photograph in human history.  (It would adorn bedroom walls, posters and memes, in addition to serving as the default wallpaper for 73% of the computers and 62% of the smart phones sold over the next twenty years.)

At the twelve second mark Kemla did the unthinkable.  She looked into the crowd.  Not at her text, as all readers must.  Not above the attendees' heads.  Not blankly into the space between them.  She peered into their eyes, one by one.  It was not searching.  It was neither defiance nor boldness.  It was not timid.  It was the intimacy of a friend sharing sorrow.  It was the plea of a child being abandoned.

The flash from Rick's camera phone caused many to flinch as if tased.  A lady in the front row gasped.

Four seconds later Kemla spoke with them.  Not over them.  Not down to them.  Not at them.  Not in the monotone of the soporific academic or the Screaming Me-Me.  Each listener became the departed heroine.  With rising urgency and pace, Kemla's tone moved from scolding to exalting, from interrogating to witnessing, from reporting to begging for one more audience.

"When you died and the bees did not mourn, did the crickets...hesitate? Did they draw long blue chords on each thigh?  Did they speak? Did they say 'She is gone. Face that fact.'?"

In the space of mere moments her angry tone became one of resignation, then inspiration:

Her volume rose, as if she were speaking to the deaf.  Or the dead.

"You remain, sui generis, one light that beams as the guide of my passing..."

Only now did Kemla release the crowd from the grip of her gaze, turning it upwards and into the distance.


Love is a Weakness - Chapter I - Meetings