A World Without Poetry?

All of us are familiar with the Press Paradox:  "News is what doesn't happen."  Planes make headlines only when they don't land.  We rarely think of the sun until an eclipse.

I pondered this while working on my magnus opus:  a chronology of English language poetry since 1066.  The "eclipse" in question was the disappearance of poetry¹ during the Cocoon Era, between 1966 and 2026.  We know how and when poetry vanished:  it was replaced by songs on the radio, starting in the 1920s.  We know how and when it reappeared:  the publication of Humorist Skancey Brown's "Everything Butt" PoVid in 2026.  Fascinating theories abound as to why poetry died in English-speaking cultures but not in others--most of which had popular tunes on the radio as well.  What intrigues me at the moment, though, is how a society operates without poetry.  This isn't like French speakers ignoring the past perfect tense or Russian lacking articles (i.e. "the", "a" or "an").  We're talking about losing an entire mode of speech--of which there are only two!  This was unprecedented in human history. 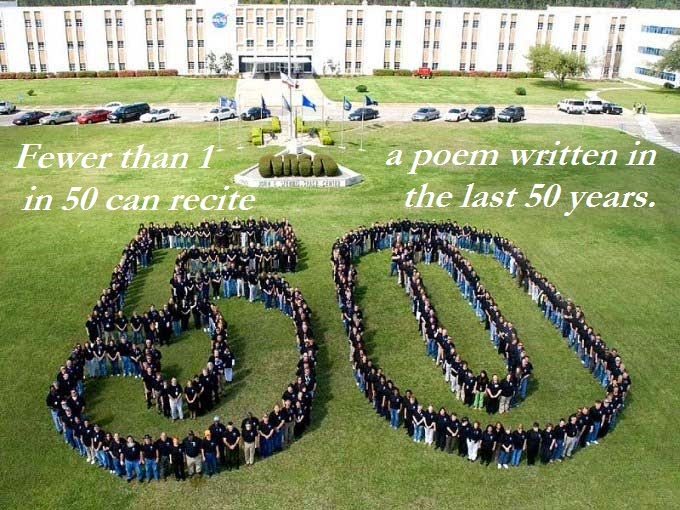 What was it like living in a world without poetry¹?  Did the entire population turn into soulless, mindless, unromantic drones?  Did civilization collapse?  Did men die miserably every day for lack of it?

It is difficult to imagine a time when no single poem would be familiar to any four randomly selected compatriots--not even four poets!  Few people can recite one measly line, let alone an entire poem, written in their lifetime.  Despite our sophisticated 23rd century search techniques, we cannot find any significant samplings of non-poets quoting verse from this period in any context.  The only popular verser from this era was a Mother Goose stand-in, Dr. Seuss, who outsold all of his contemporaries combined.  From surveys found online we estimate the average college graduate could name two living poets but could quote none.

As always, many people mistook themselves for poets, an error few others committed.  Reviews were little more than blurbs.  Not surprisingly, criticism disappeared entirely.  The prevailing sentiment was that such candor might hurt the poet's chances of getting a teaching position and, besides, why excoriate something that no one is going to read?

The taboo against quality was baffling.  Identifying one or two poets as "best" was deemed offensive--worse than bring up sex, politics or religion among strangers--because it implied that all poets weren't equal.  Technical discussions were almost as rare.  People discussed poets, not poems.  Put another way, the one thing missing from most poetry discussions was--you guessed it--poetry.

There was a fad called "slam", which we might call "animated speech".  Indeed, many hard core organizers avoided the expression "slam poetry", lest it be too closely associated with a moribund art form.  Slam appealed to the young and appeared to be a rare instance when participants left their homes.  (E-Tourney championships didn't appear until the 2030s;  before that, all videogaming was done at home.)

We know the Internet obsoleted books and magazines but it took longer than many would expect.  The last public library was closed in 2061, twelve years before the Library of Congress became a museum where we can go to touch actual pages, just as our great, great, great, great grandparents did.

Given sales and lending statistics, it is hard to see how print publishing had much success promulgating poetry.  Lest we think cost and inconvenience was the problem, poetry e-zines and e-books were equally ineffective.

Paradoxically, while Nobody Read Poetry, many expropriated it.  Because of a quirk in the crude scripting language of the time ("HTML"), one could embed pictures but not text.  That is, one could include a photo from another site directly (i.e. without copying it and posting it to one's own server).  One could "hyperlink" to another site but a user would have to click on the link and go to that secondary source.  If one wanted to incorporate the text into one's own document, though, copying and pasting was the only option...and that violated the copyright laws of the time.  It wasn't until 2024 that browsers provided this feature, and 2031 (Britain), 2033 (United States), 2034 (Canada) or 2036 (Australia and South Africa) before lawmakers got around to fixing the problem.

It is a challenge for us to envision an environment where one doesn't hear so much as a commercial jingle in the course of a day, week or month.  This was the case despite the existence of three different media:  print, pixel and performance.  Today, only the latter survives (except for analytical forums and treatises).

We may never understand how thin poetry's lifeline was.  At the turn of the millennium the number of geeks² may have been under 100 worldwide.  They served the same purpose as 7th century Irish monks, keeping classic literature alive during the Dark Ages.

It is remarkably easy for literary scholars to ignore an epoch without poetry.  It produced no major poets and no iconic poems.  While most verse is extant online, only a handfull of Cocoon Era pieces rose above their own obscurity and, at that, only in anthologies.  Nevertheless, it was during this period that poetry experienced its greatest move toward modernity and democratization.  Before it, the vast majority of recognized poets were male.  During the Cocoon, three of the four most revered³ poets were female.  That trend, if not that ratio, has continued ever since.

In the end, I believe that this peculiar time, 1966 to 2026, lies beyond our 23rd century comprehension--even beyond our imagination.

¹ - Lest there be confusion, by "poetry" we mean "[the market for] poetry", excluding song lyrics.  After all, if no one is listening then "we might as well be barking."

² - During this period, anyone who understood even the rudiments of scansion could be considered an "expert".  Many of these self-identified as "geeks", a term that didn't seem to have the negative connotation it has today.