This is Pearl, Earl's sister.  You might remember me from the last time I filled in here:  "The Ten Most Influential People in Poetry Reviewed".  I just dropped by to sub for my brother, who is away this week, hobnobbing with Mickey Mouse, Punxsutawney Phil, Surly and Buddy (of "Nut Job" movie fame), Remy (from Rataatouille), and other celebrity rodentia.  What is the world coming to when a squirrel can't define and autopsy an art form, codify metrical, critiquing and general guidelines, debunk Convenient Poetics and dog whistle scansion, birddog poems for some of the world's largest poetry 'zines, coin useful terms (e.g. curgina, corata, DATIA, cada línea, etc.), serve as moderator, consultant, programmer and/or designer on three seminal online forums, and write a commercial poetry blog without some committee burying him under a gigantic trophy?

Have you ever wondered why Commercial Poetry lists only the top six of the ten best poems of this century?  Let me give you a behind-the-scenes peek at how the critics make such aesthetic judgements.

First, it is rarely an "aesthetic judgement".  Except from some quibbling about position (e.g. 3rd rather than, say, 4th), there was no argument whatsoever about the top 9;  as for the 10th, the only disagreement was whether or not any poem qualified.  Apparently, the more that people know about something the more consensus there is regarding exemplars.  Who knew?

Second, what disputes did arise were a result of the lack of ground rules.  Was it okay for an individual to have more than one poem in the Top 10?  Earl, being a poems-not-poets kind of squirrel, was in the "Sure, why not?" camp.  He was surprised to find that this was, initially, the minority position.  No one who knows my brother should be shocked to learn that this soon changed. 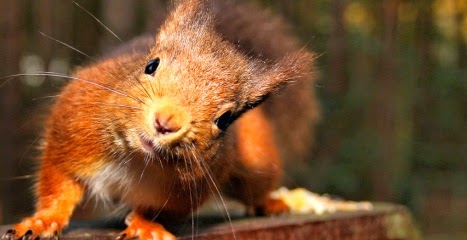 Actually, matters got worse before they got better.  While they were wrangling over guidelines the author with two pieces already on the list produced a third.  (If nothing else, this precluded any debate about who the best living poet is.)  To avoid resentment, it was agreed that these two works, #7 and #10 on the list, would not be included.  That left #8 and #9, which were penned by one of the judges (who shall remain nameless).  2 recusals later we were left with a Top 6.

Earl is hoping he doesn't blush at the awards ceremony.  It makes him look like a red squirrel in a misfitting tuxedo.