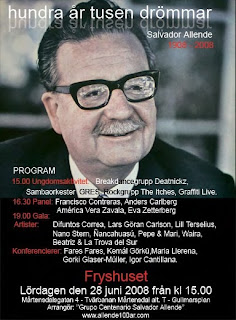 It was forty years ago:  the morning of September 11th, 1973.  Chilean President Salvador Allende's land reforms and nationalization of copper mines had met with economic sanctions from the Nixon administration.  Three generals were approached by American operatives and asked to stage a coup.  The first two refused and were killed.  The third, Augusto Pinochet, accepted.

The overthrow began in Allende's birthplace, the port town of Valparaiso.  During its unfolding, the complicity of the police forces in manipulating events became more evident.  As he vowed in a final radio speech to his people, Allende died performing his duties in the presidential palace in Santiago.  Among his final words were these, on the death of democracy in his country:

"Keep in mind that, much sooner than later, the great avenues will again be opened through which will pass free men to construct a better society."

Not until 1990 was Chilean democracy restored.

By the Pinochet regime's own estimates, 3,095 political prisoners were tortured and killed, including 1,200 "desaparecidos", many of whose bodies were dumped into the Mapocho River or directly into the ocean.

As we mourn the victims of the 2001 attack on the Twin Towers, let us not forget those of the original 9-11 tragedy.

September came like winter's
ailing child but
left us
viewing Valparaiso's pride. Your face was
always saddest when you smiled. You smiled as every
doctored moment lied. You lie with
orphans' parents, long
reviled.

As close as coppers, yellow beans still
line Mapocho's banks. It
leads them to the sea;
entwined on rocks and saplings, each
new vine recalls that
dawn in 1973 when
every choking, bastard weed grew wild.

Posted by Earl the Squirrel at 7:48 PM