In "The Difference an Audience Makes - Part I" we discussed how, without an audience, criticism inevitably comes to mean its opposite, blurbing.  That is but one of hundreds of effects, almost all of them deleterious, of not having an audience. 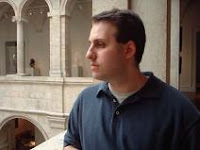 Just yesterday, July 15th, 2012, in "On the Power of Positive Poetry-Reviewing", one of my poetry heroes (a word I don't use lightly), Seth Abramson, asked this astonishing question:  "You might well tell such a person, 'Look, telling me not to purchase a Ford Flex or a Honda CRV still leaves me with 69,998 car models I know nothing about, and I need and want to buy a car now, so how is this helping me?' And you might well add to that admonishment, 'Can't anyone out there help me figure out which cars I should buy?'"

The problem is that, if we've ever read a back cover, we know that we can always find someone to blurb anything.  If all 70,000 different brands are being praised--and they will be--how is that remotely helpful?  Might as well just leave such "evaluations" to advertisers, no?  Or cheerleaders.  Why do you suppose a Consumers Guide is a blend of positive and negative?

The very last thing we need is more blurbers.  At a macrocosmic level, until and unless objective authorities stand up and say "Hell, no!" lazy producers and publishers will continue to crank out unspeakable shite, all of which will be "given unqualified praise."

When we are in the entertainment business, which includes but is not limited to art, comedy, film, music, fiction and, lest we forget, poetry, the unknown is the unsuccessful.  Why that obscurity occurs (e.g. our lack of energy, commitment, talent or luck, a heartless public, an unfair system, the numbers game, etc.) matters far less than some may think.  All of us know some very talented artists who, by any practical measure, have failed.

All of this is equally true at the global level.  Poetry has failed to capture an audience for more than half a century.  The questions are many:  Will it regain its place in the public consciousness?  If so, how and when?  How will we know if it has?  By book and magazine sales?

Lest we have forgotten

With prose, performance (if it happens at all) usually follows reading, as in a movie based on a novel.  With film, theatre, music, and poetry, performance precedes reading.  Shakespeare's plays were published years after they were staged, and only because the productions were as successful as they were.  Today, the poetry reading tries to encourage poetry reading but fails because it is--you guessed it!--a poetry reading.  As opposed to a performance.  Imagine the prospects of an unknown rock band whose idea of "performing" is limited to reading lyrics aloud onstage.

Not only is the sorry state of poetry criticism, publication and acceptance changing but the speed of that metamorphosis is increasing geometrically.  Evolution is occurring at speeds previously associated with revolution.  By the time we formulate predictions they are already the status quo.  We need to "predict" in the present progressive tense.

So, what grand transitional event is happening?  I am betting that before 2020--perhaps today--poetry produces something for the first time in half a century:  iconic words.  That's right.  By 2020 we will no longer be able to say that the average person is unable to cite a single line of poetry written since 1970.  All it takes is one poem going viral.  How long will this take?  Personally, I'm surprised it hasn't happened already!

Let's break the sequence of events down.  Almost all print venues have a web version and almost all of those feature videos:  interviews, readings/performances, and slide shows.  With this in mind, submitters are beginning to include URLs of their poems on video to permit the editor and no one else to view the performance.  (Currently, the easiest way to do so is to upload it to YouTube and mark it as "Private".)

In a choice between texts of equal caliber a video could be the deciding factor.  Even if it isn't up to the publisher's professional standards the video helps the editor envision the motif.

The next hurdle is the publishing world's fixation on first serial rights.  In due course, some practical editors--assuming that isn't an oxymoron in the poetry world--will realize what an opportunity they are squandering.  They will go from demanding YouTube videos be Private to insisting that they be Public.  By doing so editors can see how many viewers it attracts and what their opinion of it is.  In both senses of the term, editors can see how the poem performs.  Think test marketing here.  If and when the piece is accepted its author will be asked to change the YouTube title to include the periodical's name before the poem's (e.g. Pat's Poetry Review:  "Proof Rocks") and include a link to the webzine.  In this way, every work published becomes an advertisement on one of the highest trafficked sites in the world.  Now that there's a link to something with broader appeal than text we can add social media into the mix.  Poetry could go from being dead to being a centerpiece of our culture in the space of 24 hours.

Magazines and webzines are by no means the only ones that benefit from the web's multimedia options.  Individual books have pages on publishers' and booksellers' sites.  These will accommodate videos or links to them as they are created.  Inevitably, people will purchase poetry collections for the same reason they bought music CDs:  because they already love one or more of the pieces included.  Let's not forget the effect of participation.  Having acquired the book or e-book, readers might become video producers of other poems from it, creating an upward spiral of success.

A new paradigm is being born.