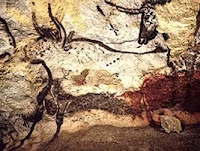 Consider cave paintings like those in Lascaux, France. Some of these date back more than 30,000 years. Consider the very real possibility that these may have served as props for storytelling. In their retelling, these tales could have been varied (i.e. prose) or verbatim (i.e. poetry) performances. For example, an Aesop's fable will change from one publication to another but no one messes with the words of the Iliad. If the ancients did, indeed, use pictures to accompany their recitations they demonstrated an understanding that poetry is a multimedia art form.

Notwithstanding the shape poem, the acrostic, e.e. cummings and the like, the existence of poetry in nonliterate and preliterate societies proves that poetry belongs to a far stronger medium than the page. Thousands of years after the introduction of writing, 560+ years after the invention of the Gutenberg press, every poet and publisher has to deal with one inescapable fact:

Poetry isn't meant to be read. Never was. Never will be.

The difference between performed and written poetry is much more than inflection, pace, tone and timber; we will see facial expressions, gesticulations, movements and pointing--with or without other visual aids. Of course, verse can also be enhanced by clapping, drum beats, music and dancing. As for an "oral tradition", if poetry came from disembodied voices radio would be filled with it. In truth, the proliferation of radio led directly to the decline of written poetry and the ascendency of song.

See how much (or how little?) it improves when recited. This may be true even for those of us who don't speak a word of Spanish. For what it's worth, here is the English version:

Now compare the textual and audio versions to a video:

People prefer performance to reading plays and movie scripts. Where did we ever get the notion that these same preferences wouldn't be the same for poetry? Yes, text makes for easier study but shouldn't we postpone such examination of a work until after we've enjoyed it? If only to know if we enjoyed it?